More than 430 graduate from THS 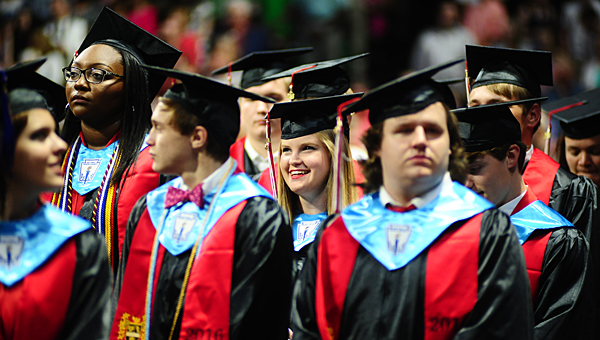 A THS senior smiles after joining her classmates during the school’s graduation ceremony on May 24 at Bartow Arena. (Reporter Photo/Neal Wagner)

BIRMINGHAM – Among the advice legendary former University of Alabama head gymnastics coach Sarah Patterson shared with the Thompson High School class of 2016, she touted one thing above all else.

“Dedicate yourself to making a difference in the lives of others,” Patterson told the more than 430 graduates a few minutes before they walked across the stage at UAB’s Bartow Arena in downtown Birmingham on May 24. “I encourage you to dream big. I challenge you to make a difference in our world in some way.”

Despite earning half a dozen national championships while coaching gymnastics at the University of Alabama, Patterson told the THS graduates the most rewarding part of her time at UA was “helping young students like you to achieve their lifelong goals.” 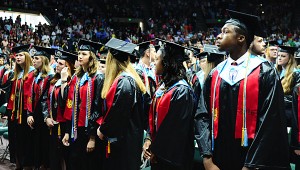 Before even walking across the stage, the THS class of 2016 had already achieved one goal by earning a school-record $11.3 million in scholarships.

“That is incredible,” Patterson said of the graduates’ scholarship total. “This is the beginning of your championship journey.”

During the ceremony, the school’s Junior ROTC unit presented the colors and Gavin Baker led the Pledge of Allegiance. Emily Norris led the event’s invocation, and the THS Madrigals performed “I was Here” following Patterson’s speech.

“It truly is symbolic, and it’s representative of a lifetime of love and guidance and support that you have given these young men and women that we have sitting here tonight,” THS Principal Dr. Wesley Hester told the parents in attendance. “It truly is a (kindergarten) through (12th grade) celebration. It truly is a community celebration.”

“Mark Twain said it best. He said ‘The two most important days in your life are the day you are born and the day you find out why,’” Perry said. “I believe that we have now made it to a place where we are able to identify our why.”

“All the hours of studying, procrastination and hard work have finally paid off. We have all faced various obstacles, and we have all found a way to overcome them,” Owens said. “I have faith that everyone here will go out and make the world a better place.”