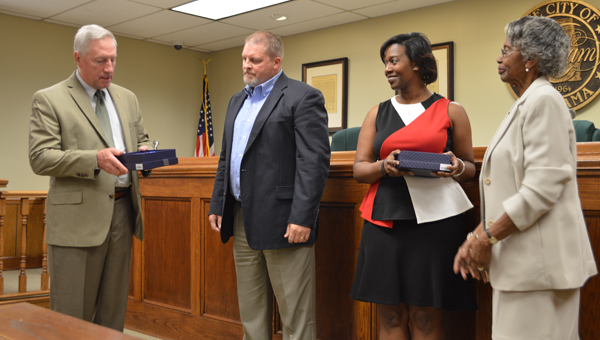 PELHAM— To acknowledge the retirement of Dr. Barbara Regan and Brian Long from the Pelham City Schools Board of Education, both members received a plaque to commemorate their service.

Both plaques are engraved: “In appreciation of your hard work and dedication to the inaugural Board of Education 2013-2016.”

“We just wanted to recognize them. They were part of the initial Board of Education for Pelham City Schools,” said Board President Rick Rhoades. “Lots of long nights, lots of thought and work went into this. I could really talk for a long time about these two people, but I think it’s enough to say that these are really, really great people that care about this city and care about our children.”

Allan Wade will take over Place 3 at the next board meeting, beginning a new five-year term with Pelham City Schools. City Councilmember Beth McMillan nominated Wade at an April 16 City Council meeting.

Regan’s resignation was announced at a March 21 board meeting, and her daughter, Sharon Samuel, was appointed as her replacement for Place 4. Samuel will finish the remaining year of Regan’s term.

“I think she presented herself well and has a lot of ideas moving forward as far as education is concerned,” Mercer said at the April meeting. “I think she’ll be an asset to the team.”

Wade will begin his term June 1 and will attend his first Board of Education meeting June 13 at 6:30 p.m.