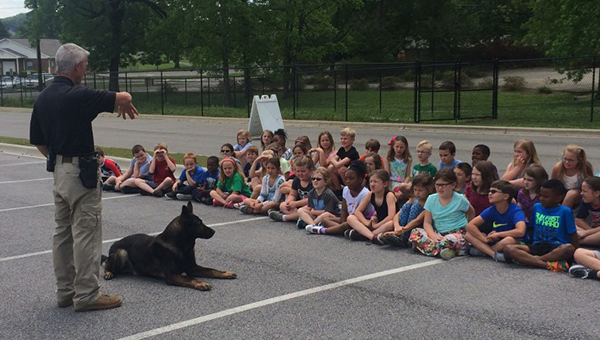 ALABASTER – Kindergarteners in Julie Howanitz’ class at Meadow View Elementary School gasped as they saw their visitor for the day walking down the school’s hallway toward their classroom.

“I can see him!” several of the children shouted shortly before Alabaster police officer Hunter Hammonds escorted the department’s K-9 officer, Micco, into the room.

While multiple uniformed police officers visited the class on May 19, Micco easily stole the show.

“We use him for his nose,” Hammonds said. “He smells things people aren’t supposed to have.”

For the past year-and-a-half, Hammonds has been working with Micco to operate the first K-9 team the Alabaster Police Department has had in many years. Micco, a 3-year-old Belgian melanois the department purchased from England, works with Hammonds to locate and identify controlled substances during traffic stops, property and school searches and more.

The pair also spends time each month participating in community outreach sessions such as the one at MVES on May 19.

To demonstrate Micco’s abilities, Hammonds asked Howanitz’ class to choose a hiding place for a synthetic substance designed to mimic the smell of an illegal controlled substance.

Without Micco in the room, the class instructed Hammonds to place the substance into a plastic crate filled with paper files. As soon as Micco entered the room, he quickly walked straight to the container and sat down, earning him some playtime with his favorite toy: A white piece of PVC pipe. 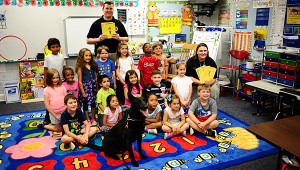