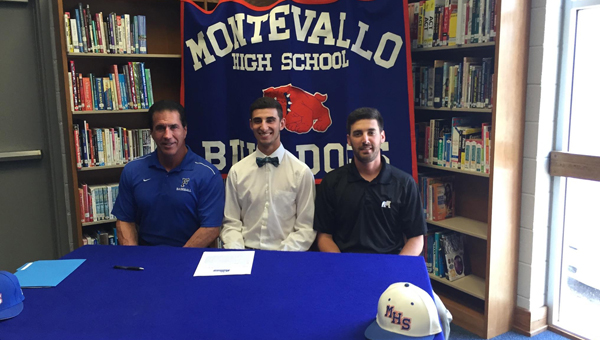 Jaret Yancey will play baseball for Faulkner University in Montgomery next year. (Contributed)

MONTEVALLO – On May 12, Montevallo senior pitcher Jaret Yancey made his college decision final, as he committed to continuing his baseball career at Faulkner University, an NAIA school out of Montgomery. Yancey, who threw 37.3 innings for the Bulldogs this year and finished the season with a 5-3 record and 39 strikeouts, helped lead the Bulldogs to the 5A quarterfinals, and has been a part of one of the most successful athletic classes to come through Montevallo in some time.

“A lot of them didn’t come on the scene as a ninth-grade starter,” Simpson said of this crop of seniors. “Jaret was one of those guys who had to come through the ranks. But he kept getting bigger, kept getting stronger. The reason so many had offers is because so many of them did what they needed to do in the classroom. Jaret has been a great guy, a great leader for us. He’ll do great things.”

Yancey is the third senior from this Montevallo team to make the decision to play baseball in college. Hunter Nabors signed with Itawamba Junior College on Feb. 11 and Zac Thompson turned down scholarship offers to walk on at the University of Montevallo as well. Along with these three, Jonathon Pintaro will play college baseball at Shorter University in Rome, Ga. and Justin Pickett also has some walk-on opportunities to play in college as well.

Montevallo hosted a playoff game in football, boys and girls basketball as well as baseball this school year in one of the most all-around successful athletic years in the school over the last 25 years.

“The thing I’ll remember about this class is how good of kids they were,” Simpson added about the graduating class. “They were the epitome of student-athletes. Not one of these seniors I’ve ever had to discipline, never had to worry about any of them in classroom. That says a lot more about them than their baseball stats do.”

Evangel Christian’s Micah Murphy makes his way up field with Kingwood Christian defenders draped all over him. (Contributed) By BAKER... read more