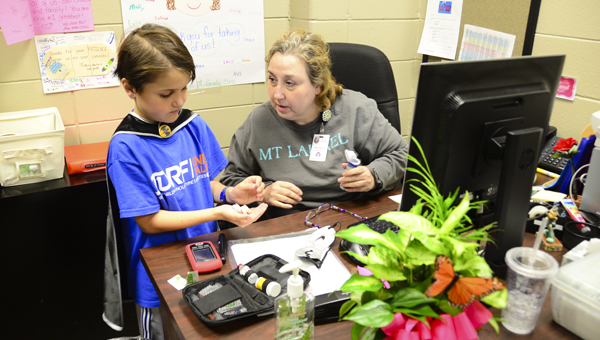 Seconds later, the number “53” appeared on the screen of Kirkpatrick’s personal diabetes monitor, or PDM, signifying his blood sugar had dipped below the acceptable range of 100-180. Daly gave him glucose tablets to bring his level back up quickly.

Kirkpatrick, 8, has Type 1 diabetes and must log blood sugar checks multiple times during the school day to ensure his level hasn’t dropped to a dangerous range.

The checks are part of the routine Kirkpatrick and his family have established since he was diagnosed with diabetes as a 3-year-old.

“January was our five-year mark,” Kirkpatrick’s mother, Lori, said. “He’s been coming (to Daly) since he started kindergarten three years ago.” 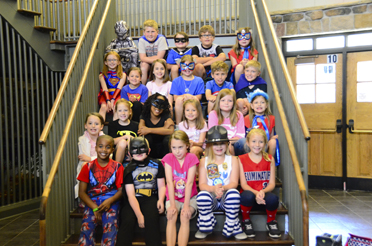 MLES students who donated to the Juvenile Diabetes Research Foundation were allowed to dress as super heroes May 25. (Reporter Photo/Emily Sparacino)

May 25 was a special day for John Henry, though. For the first time, MLES students who made donations to the Juvenile Diabetes Research Foundation in honor of him were allowed to dress as super heroes.

“We always like to benefit a great cause,” MLES Principal Celita Deem said. “John Henry is a leader in the school and a bright young man, and we’re always happy to help any way we can.”

Donning his Batman cape and mask, John Henry left the office with his “buddy,” MLES student Sarah Baird. As his buddy, Baird is responsible for walking with John Henry anytime he leaves his classroom in case his blood sugar drops too low and he needs immediate assistance.

“That’s been Sarah’s job this year,” Lori said. “She’s been a good buddy.”

“Everyone wants to be John Henry’s buddy,” said Daly, who sees John Henry at least three times a day, typically before and after lunch and at the end of the school day.

In addition to his blood sugar checks, John Henry has to report his physical activity and food intake to Daly.

“Every carb has to be accounted for,” Lori said. “You don’t realize how difficult that can be.”

Type 1 diabetes is an autoimmune disease that impacts millions of people and occurs when the body’s immune system attacks and destroys the beta cells in the pancreas that produce insulin, a hormone essential to turning food into energy, according to information from JDRF.

John Henry’s father, John, said John Henry has developed a solid understanding of diabetes and what he must do to manage it.

“He does pretty good,” John said. “He’s gotten better about telling us when he’s low.”

Lori said his diagnosis at such a young age came as a surprise to the family.

“I think the first reaction for us was kind of shock because we have no family history,” she said. “There were a lot of late nights and 2 a.m. blood sugar checks. You definitely have to develop a new routine.”

John Henry was chosen to be an ambassador for JDRF locally this year and was among several children honored with a medal at the annual A Night of Hope Gala.

Tracy Bennett Smith, executive director of the Alabama Chapter of JDRF said the event raised roughly $310,000 in one night.

“We are just so appreciative,” Smith said. “It helps generate awareness about the disease.”

John and Lori, who was wearing a shirt that read “My son is my hero,” visited with John Henry on Super Hero Day at the school.

“He was excited about us coming,” Lori said. “This (day) will kick off our donations in the (JDRF One Walk).”

Numerous MLES students participated in Super Hero Day, the proceeds from which will benefit JDRF’s research of Type 1 diabetes.

“It makes me feel very, very great because we’re getting closer to the cure,” John Henry said.