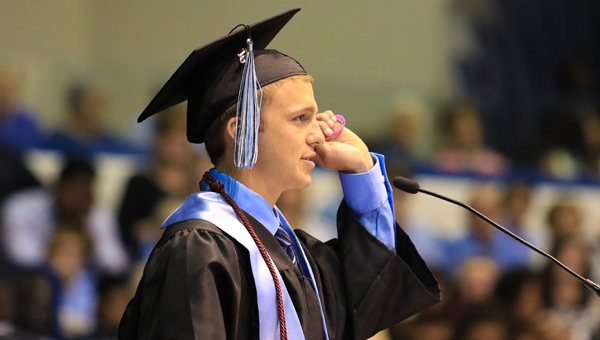 Spain Park High School senior class president Andrew Perry talks about his inspiration during a speech at the Spain Park class of 2016 graduation on May 25. (For the Reporter/Dawn Harrison)

BIRMINGHAM—As 390 graduation caps were tossed into the air, the Spain Park High School class of 2016 closed the book on 13 years of education and prepared to take the next step in their journeys.

Spain Park’s 390 graduating seniors received their diplomas in front of family, friends, teachers, Board of Education members and members of the Hoover City Council at Samford University’s Pete Hanna center on May 25.

“Tonight we are celebrating the work of these graduates for the past 13 years,” Spain Park Principal Larry Giangrosso said.

The class of 2016 was offered more than $24.7 million in scholarships and gained admittance to 163 colleges and universities. Next year, they will attend 40 different colleges, spread across 35 states and four countries, and three will pursue a career in the military. 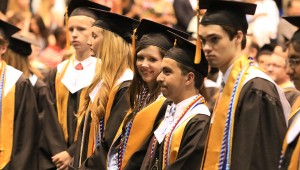 The Spain Park High School class of 2016 graduated 390 students on May 25. (For the Reporter/Dawn Harrison)

“There are very few things more valuable than the transformation you see (here),” valedictorian William Haynes said, noting the class of 2016’s personal and academic growth. “Throughout high school we have gained a bunch of knowledge.”

“Most importantly, we’re the first class ever to beat Hoover in football, and we did it not once, but twice,” Hoffman said. “It’s the coming together for a common cause, like a football game, a basketball game or a pep rally. It’s so much more than being a student body.”

Senior class president Andrew Perry talked about the support system and inspiration that carried him through high school, namely his older sister Kayla, who is battling cancer. He also congratulated his fellow graduates on their accomplishments.

“It makes me so proud to say we made it, and we made the best memories along the way,” Perry said. “Go Jags forever!”

The Alabaster Board of Education voted during a May 25 meeting to approve a bid for phase two of the... read more