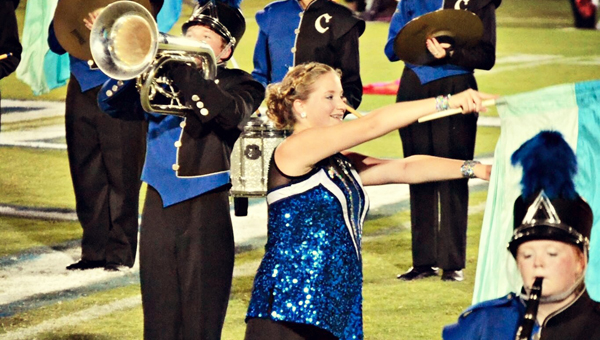 CALERA—After auditioning for college teams, Calera High School’s dance team captain and colorguard captain are following their passions to universities in the state.

Tatyana Fitzpatrick is continuing her dance career on the Troy University Dance Line, and Kaycee Lollar is joining the colorguard of the University of North Alabama Pride of Dixie Marching Band.

“(I’m looking forward to) being part of a team with a bunch of girls who really care about what they do and are really there for the right reasons,” Lollar said of her decision. “Just being able to perform with a more talented group of people.”

Lollar said her father knew the director at the University of North Alabama, and he had been trying to convince her to choose it long before she finally committed to the school’s program.

Fitzpatrick said it didn’t take any convincing for her to select Troy. In fact, making the dance team at Troy was the only thing that would keep her from going to an out-of-state college, she said.

“I wanted to go there because I loved their band when we used to go to competitions when I was high school,” Fitzpatrick said. “I used to love seeing their band, and I wanted to be on the dance team.”

Both girls said the audition process wasn’t as hard as they thought, but each had a different reaction to making the team.

Lollar had auditioned early because she had prom later that night. She said the colorguard at North Alabama had a different style than she was used to, but she still felt confident about her audition.

On the way to prom that night, she said one of the captains sent her a text message saying she made the team.

“I was just really excited; I didn’t know how to react,” Lollar said. “I just kind of sat there, and was like ‘Oh my gosh, I made it.’”

Fitzpatrick described the audition process as easier than the high school auditions, noting it was laid back and relatively stress free. The day she found out she made it, though, was a different story.

She was having a bad day, she said, running around trying to find a replacement prom dress the day before prom. The one she had ordered online was ruined.

“The captain of the team text me and told me that I made it, and I was excited,” she said. “(But) I was still stressed out about a lot of things. Once I got home and found a dress, I was like ‘Oh my gosh, I made the dance team.’ I got really excited.”

Both girls have already started practicing, and both said they are enjoying it. Fitzpatrick said the team does the dancing she loves most, so she’s excited to see what the future holds.

“I’m just looking forward to dancing with a team that I always wanted to be on,” she said.