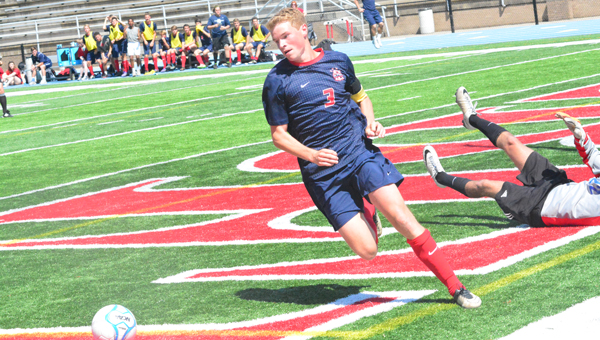 Oak Mountain’s Hunter Holstad had 18 goals and 16 assists in his senior campaign, and led the 7A Eagles to their second-straight 7A state title and an undefeated season. Holstad finished as the runner-up for the Gatorade Player of the Year in Alabama, and he is the Shelby County boys soccer Player of the Year. (File)

NORTH SHELBY – The Oak Mountain Eagles finished this year 28-0-2 on the soccer pitch, with both of their ties coming on the same day, Feb. 13, in the early-season Lakeshore Shootout, and closed out the year 25-0-0 after that tournament. This Eagles got as close to perfection on the pitch as it gets, and USA Today recently tabbed them as the No. 1 boys soccer team in the country. It’s essentially impossible to have a better, more dominant year than the Eagles had this season, and that is a testament to everyone on that team, from the coaches to the players and managers, and it is impossible to put this teams successes at the foot of just one player.

That being said, Hunter Holstad was the motor that made the machine purr this year for Oak Mountain. The senior defender-turned-midfielder did whatever was asked of him in his final prep season, and did it all extraordinarily well. He had 11 game-winning goals this year, and it’s a tall order to imagine this Eagle team finishing the way it did if he was removed from the picture. Holstad was the only junior to be named a First Team All-State player a season ago, and has helped lead Oak Mountain to a ridiculous 51-4-3 record over the last two years, winning two 7A titles in the process. He is the Shelby County boys’ soccer Player of the Year for the 2016 season.

Holstad started his career with Oak Mountain as an outside back in his sophomore season, and with his 6-foot-1-inch frame and five-minute mile speed, looks to transition into that role seamlessly at the Naval Academy next year, which is where he will play his college soccer. His conditioning, frame and technical skill are unique at the high school level, and he no doubt would have been most comfortable staying in that role as a senior. However, this Oak Mountain team was young up front, with three key pieces from the 2015 state title team gone, and needed leadership in the middle of the field. As a result, Holstad played his senior season in the midfield, conducting the youngsters around him, or up top in the attack when the Eagles needed instant offense.

“He’s such a high-level technical player,” Oak Mountain head coach Daniel DeMasters said of Holstad. “We could have put him anywhere and he would have been great. He transitioned from a stud defender as a sophomore to a guy who could go wherever we needed him to be. We’d put him up top when we needed to, he could go anywhere.”

DeMasters, who was a three-time NSCAA High-School All-American in his own right and was selected the Gatorade Player of the Year in Pennsylvania after his senior high school season, played Division I soccer at Villanova University, and captained the Wildcats during his tenure. The Oak Mountain coach knows the game well, and has been around top-level soccer talent all his life. According to him, Holstad is an incredibly rare talent at the high school level, for a number of reasons.

“As an overall person, player, captain, he’s the best player I’ve ever coached,” DeMasters said. “He’s a unique guy, one of the kids who comes around once every 10 years, maybe. Hunter isn’t flashy, he doesn’t care about stats, those came along because that’s the kind of player he is.”

This year Holstad finished as the runner-up in the Gatorade Player of the Year race to JJ Williams, the University of Kentucky commit out of Alabama Christian Academy in Montgomery. Williams had more than 60 goals for his 4A-5A program this year, which is a tremendous, eye-popping number. Holstad himself had 18 goals and 16 assists this year, good for a still-impressive 52 points, but didn’t come close to matching Williams’ gaudy goal total. Williams no doubt earned the award and was a deserving recipient, but it’s important not to reduce player impact on the pitch down to only measurable statistics, especially in soccer.

Soccer can be a tricky sport in terms of trying to measure player impact. In basketball, football and baseball, more often than not those players with the most impact on their teams’ performance will be the ones with the most impressive stats. That’s not always the case in soccer. It definitely can be true, and statistics are still the top litmus test for determining any one player’s impact, but stats do not paint as clear of a picture in soccer as they do in other sports. Oftentimes on the pitch, games can be won and lost on the backs of players who finish the game with little impact on the box score.

Holstad’s 18 goals didn’t even place him in the top five in Shelby County for goals scored, and neither did his 16 assists. However his ability to see the field, defend, make the correct pass and get forward in the attack, all while directing traffic around him, makes him an invaluable player. Also, according to DeMasters, it is not especially hard for any sports fan to see Holstad’s impact on a game.

“The thing that makes him stand out more than anything else is his leadership,” DeMasters said. “That stuff is universal. When you see a guy demanding effort from his peers and being respected, that’s special. Hunter is out there barking stuff out, and he’s listened to. Guys know that he is the best, and they want to follow the best. That’s a natural gift he has, and it’s universally seen by every sports fan.”

The best player on one of the best, if not the best team in America, Hunter Holstad is the 2016 Shelby County boys soccer Player of the Year.