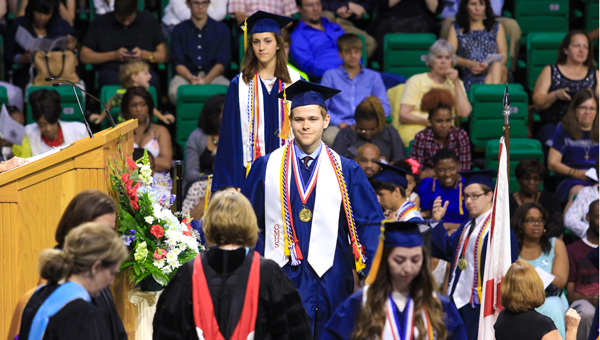 The 360 students in the Oak Mountain High School class of 2016 graduated at Bartow Arena on May 25. (For the Reporter/Dawn Harrison)

BIRMINGHAM—Four years of high school drew to a close as the 360 members of the Oak Mountain High School class of 2016 crossed the stage at Bartow Arena and received their diplomas on May 25.

“In reality, (graduation) is not the end of anything, but the beginning of everything,” OMHS Principal Dr. Kristi Sayers said to the class of 2016. “Continue to be the person that makes things happen. I know you are going to go out and continue to make things happen.”

Joshita Suresh, one of the two OMHS class of 2016 valedictorians, and salutatorian Julia Bray both thanked the teachers who shaped their OMHS experience.

Suresh said her teachers challenged her and her classmates “to be the best version of yourself.”

“(Thank you to those) who took the time to do the little things that made us who we are today,” Bray said, noting the teachers, counselors and other who influenced her time at OMHS.

Students in the class of 2016 will take many different paths next year. Eighty-four percent will continue their academic journeys at colleges and universities, while the remainder of the class will join the military, enter the workforce or enroll in technical programs.