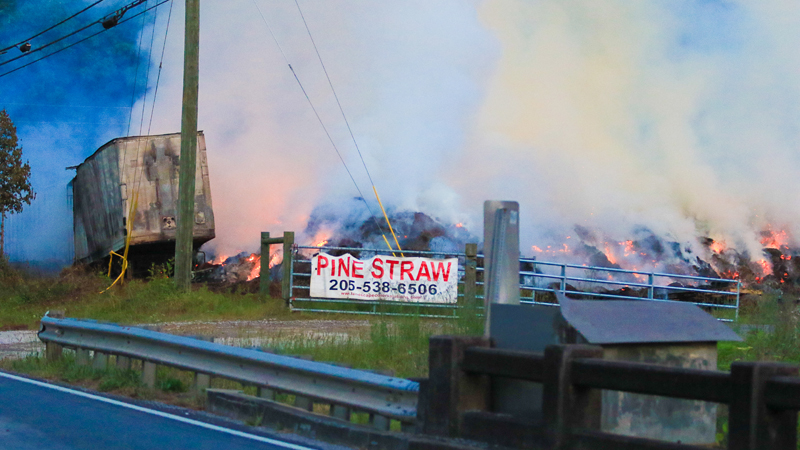 All roads are now re-opened after a fire at Swift Straw at the corner of Shelby County 11 and Old U.S. 280 in Chelsea May 25. (For the Reporter/Dawn Harrison)

CHELSEA – Chelsea firefighters are still monitoring and working to extinguish a pine straw fire at Swift Straw at the intersection of Shelby County 11 and Old U.S. 280, but all roads in the area have re-opened.

The blaze started at about 3 p.m. May 25 and continued to burn overnight, creating large amounts of thick smoke and necessitating temporary road closures in the area.

No injuries have been reported from the fire, the cause of which has yet to be determined by the fire marshal, Shirley said.

Members of Shirley’s department have kept a constant watch of the fire since it started as they work to allow the remainder of the affected pine straw to burn in a safe and “controlled manner,” Shirley said.

“We have put quite a bit of water on it to control it,” Shirley said. “It’s not going to go out.”

Shirley explained that the large piles of pine straw contain deep-seated embers that, when stirred and given more oxygen, can spark and cause the fire to spread. Equipment is needed to separate the pine straw into smaller piles and allow each pile to burn out.

Shirley said the department will re-evaluate the situation and post updates on the Chelsea Fire and Rescue Facebook page regarding the status of the fire and if more road closures are necessary.

In a written statement released May 26, Operations Manager Joseph Arnold with Swift Straw thanked the Chelsea Fire Department for its assistance and quick response to the situation.

“I also would like to apologize to the city of Chelsea, as well as anyone else who was inconvenienced by this event,” Swift wrote. “We have been working tirelessly with the fire department to get the fire suppressed. We are already starting the cleanup process and want to assure everyone that completing it quickly is our top priority.”

The company is taking steps to “make sure this never happens again,” the statement read, and has implemented new controls on the yard to increase safety and proper handling of the pine straw.

“The last thing we, as a business, want to do is inconvenience our customers, neighbors or anyone for that matter,” Swift wrote. “We have received an outpouring of support from customers and residences of the area alike and can’t thank them enough for it. We do want to let everyone know that we are still in business, and will not skip a beat in servicing our customers in the Birmingham metro area.”