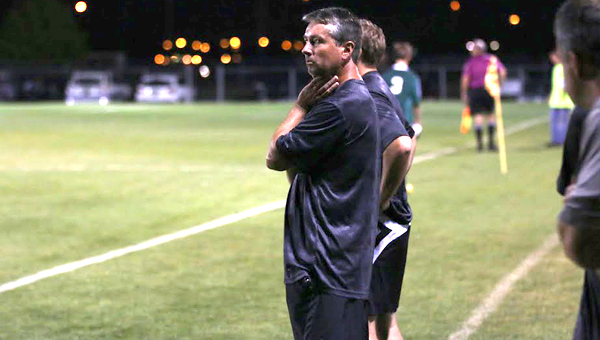 Westminster School at Oak Mountain head soccer coach Patrick Fitzgerald led the Knights back to the 1A-3A Final Four this year, and is the Shelby County boys soccer Coach of the Year for the 2016 season. (Contributed)

This was a tough one. Probably the hardest choice of the school year as far as a Coach of the Year decision is concerned. With so many talented teams and so many competitive programs close together, trying to wade through the long list of deserving boys’ soccer head coaches was not an enviable task. But at the end of the day, the job that Patrick Fitzgerald has done at the tiny Westminster School at Oak Mountain this year takes the cake.

First though, a note on some of the other coaches in the county. Oak Mountain’s Daniel DeMasters can’t do much more than never lose, and while he had the best team in the state and was expected to consistently win, the expectation to win in and of itself makes the job that much harder. Zach Morgan took Helena back to the 4A/5A Final Four this year and finished the job the Huskies started last year, winning the school’s first-ever team state title. Patrick McDonald also got Pelham back to the 6A Final Four for the second year in a row after a slow start, Shawn Brower did a fantastic job reviving a Briarwood program that was on its last leg before he arrived, and Rik Tozzi kept Indian Springs humming along as the best small school in the state for the entire regular season. Truly, each of these coaches could have been named Coach of the Year for the job they did and no one would bat an eye.

So why does Fitzgerald get the nod? Let’s take a look.

The fourth-year coach of the smallest AHSAA school in the county was in a tough spot coming into this season. Coming off a 1A-3A state title in 2015, the Knights were one of the top-five teams in the state that year, regardless of classification, but were gutted in the offseason with the loss of a number of key seniors. Jack Stein, the Shelby County Player of the Year in 2015, Michael Stanford and Fitzgerald’s son John being chief among them. The loss of that senior class would be a tough blow for any team to come back from, but for a school of Westminster’s size, it could have been crippling.

On top of that, Fitzgerald isn’t quite sure of the first time he held a practice with his entire team this year, but knows it was at most a day before the Knights’ first game of the year against Hewitt-Trussville on Feb. 8, as basketball season had to finish before Westminster’s soccer roster could be complete. Now, that is not at all uncommon among smaller schools in the state, as most of the teams in Westminster’s classification rely on multi-sport athletes to fill their rosters.

What is unique about Fitzgerald and Westminster, however, is that three of his players, John Porterfield, Josh Lipperd and John Richardson, also ran track this spring on Westminster’s track team that placed fourth in the 1A state meet. Fitzgerald lost three integral pieces to his team for at least a day each week to allow his kids to run track, and on more than one occasion in the last two years, kids have run track and played soccer for Westminster on the same day. He credits Westminster Athletic Director Jeff Poore, assistant AD Michele Mann and the host of assistants that help with the spring sports for helping to coordinate the schedules to make it possible for his players to participate in both.

With the loss of such a talented class from that 2015 boys team and the fact that he did not get his team completely together until practically the first game of the year, naturally the first part of the season was a slog. The Knights did not win a game in the month of February, and started the year 0-4-1, as they tried to find an offensive identity. However, slowly but surely, the Knights began to figure out how to win. From March through the end of the regular season, Westminster only lost three times, two of those losses coming to 7A schools Spain Park and Hoover, and quietly turned into a dangerous team to see in the playoffs.

The season reached its climax in the second round playoff matchup against in-county rival Indian Springs, the team that had been No. 1 in the 1A-3A class for the entire regular season. The Knights had split the regular season series with Springs, and needed to upset the odds-on favorite to win the 1A-3A title this year in order to punch their second-straight Final Four ticket. Westminster fell behind 1-0 early in the game, and couldn’t find an equalizer for the majority of regulation. But, with less than five minutes left in regulation, Jared Keeler slammed home the tying goal, forcing overtime. After two scoreless OT periods, the Knights beat Springs in penalty kicks 5-4, after freshman keeper Brodie Winks came up big, blocking Springs’ fifth attempt.

The win was the culmination of an incredibly gritty and impressive season from the Knights, as they simply refused to fold when most other teams would have. More importantly than that single win, however, Fitzgerald has shown he can mold rosters (both boys and girls, remember) on the fly and create winners over the course of a season, and has done so consistently in his time at Westminster. It’s not about how you start, it’s about how you finish, and under Fitzgerald the Knights have consistently finished strong. Patrick Fitzgerald is your Shelby County boys soccer Coach of the Year for the 2016 season.

Knights fall to Bayside in shootout

William Moore and the Westminster School at Oak Mountain Knights lost to Bayside Academy in a shootout in the 1A-3A... read more