In connection with a January drug sting in Alabaster, the Shelby County Drug Enforcement Task Force arrested 35-year-old April Gray May 25 and charged her with trafficking marijuana. 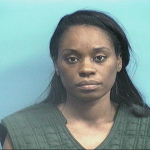 Gray, who lists an address on Village Lane in Pelham, was allegedly found in possession of approximately 5,703 grams of marijuana at her home on Feb. 27, 2014, according to court documents.

According to Lt. Clay Hammac, Gray’s husband, 37-year-old Jameel Gray, was charged with trafficking marijuana in Alabaster on Jan. 14, along with 28-year-old Eboni Camille Hale of Alabaster and 29-year-old Mark Alexander Lewis of Hoover.

A fourth arrest, 31-year-old Dennis Riles Jr., was made on Feb. 20. Riles was charged with conspiracy to traffic marijuana.

In a May 27 interview, Hammac said this was a large criminal enterprise investigation, utilizing a significant number of hours, surveillance, undercover work and informants.

“There was some investigative value in following up on a number of leads we developed in the case, in which Ms. Gray was identified as a key suspect in the drug investigation,” Hammac said of April Gray’s recent arrest.

According to Alabama law, trafficking marijuana is a Class A felony. If convicted, the suspect could face up to life in prison.