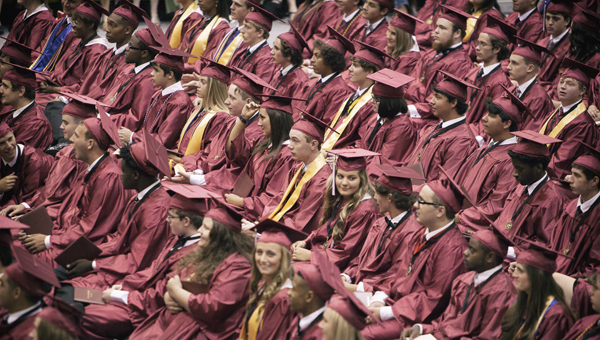 Members of the Shelby County High School class of 2016 take in what could be their last time together as a class at a graduation ceremony May 26 in Montevallo. (For the Reporter/Kevin McKee)

MONTEVALLO – For the 123 students comprising Shelby County High School’s graduating class of 2016, May 26 represented the completion of one chapter and the start of a new chapter in their young lives.

Students were surrounded by family and friends as they received their diplomas along with recognition for their scholastic achievements in a 7 p.m. ceremony at the University of Montevallo McChesney Student Activity Center.

“Sitting in this room are the people who have shaped your lives,” valedictorian Landon Bentley said to his classmates. “Choose what makes you happy. Choose who makes you happy.”

The award, given each year in honor of two former educators, is the highest honor that can be bestowed upon a graduating senior from SCHS based on leadership and academics, Stansell said, adding this year’s recipients are “two very deserving young people.”

The ceremony closed with students and alumni singing the SCHS alma mater.