COLUMBIANA – A 26-year-old Odenville woman will spend the next two years on probation after she pleaded guilty in early May to having the components to create a methamphetamine lab in her vehicle. 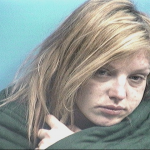 Christina Maria Roden, who lists an address on Kelly Creek Road in Odenville, pleaded guilty to one felony count of unlawful manufacture of a controlled substance during a May 5 hearing in front of District Court Judge Daniel Crowson.

As a result of the guilty plea, Crowson originally sentenced Roden to five years in prison, but suspended the sentence to two years of supervised probation.

Crowson also ordered Roden to complete a substance abuse treatment program and to take and pass random drug and alcohol tests while on probation. If Roden violates the conditions of her probation, her original five-year prison term could be reinstated.

Charges of obstruction of justice by using a false identity and use or possession of drug paraphernalia were dropped against Roden through a plea agreement.

The Shelby County Drug Enforcement Task Force arrested Roden on April 6 and charged her with the three crimes.

After a caller reported the shoplifting incident and provided a description of the suspect’s vehicle, Alabaster officers were able to locate and pull over the vehicle a short time later, Hammac said.

During the traffic stop, an officer allegedly spotted items needed to construct a meth lab in Roden’s vehicle and alerted the Drug Task Force, Hammac said.

According to her arrest warrants, Roden’s vehicle contained a box of Sudafed, cold packs, lithium batteries, drain cleaner, salt, camp fuel, rubber tubing and coffee filters. She also allegedly possessed syringes, a pipe and scales, according to her warrant.