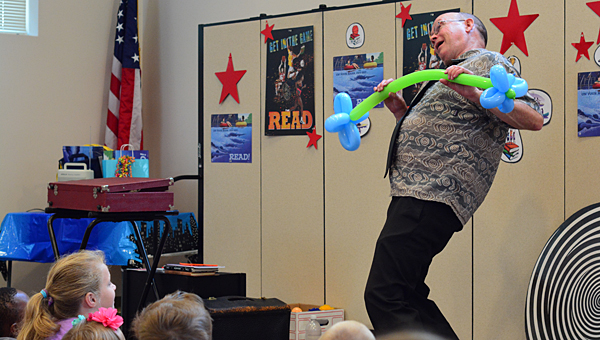 ALABASTER – Before each magic trick he performed at Alabaster’s Albert L. Scott Public Library on June 1, Russell Davis first explained where he learned how to perform them.

In all cases, reading served as the spark for Davis’ gasp-inducing magic tricks.

“Everything I learned about magic, I learned through reading,” Davis said has he held up a book titled “Rope and Rings.”

After showing the kids how he learned to be a magician, Davis wowed the children by performing tricks such as cutting a rope into several sections and instantly putting it back together, continually finding a specific card in a deck and seemingly making objects disappear and reappear. 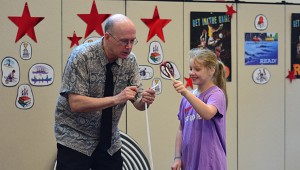 The library hosted two magic shows on June 1 to celebrate the beginning of its summer reading challenge, which is titled “On your mark, get set…read!” The kickoff event for young adult readers will be held at 6:15 p.m. on Thursday, June 2.

Over the next six weeks, local children who have signed up for the challenge will set personal reading goals and regularly report their progress to the library. As the kids hit milestones, they will receive prizes from the library.

“The program is from newborns to 18-year-olds, and we really mean that,” Albert L. Scott Youth Services Librarian Frances Smith said with a laugh. “Even if children are too young to read themselves, we encourage their parents to read to them.”

Smith said participation in the program has grown since the library began offering online registration, and said the library has scheduled plenty of events for children and young adults throughout the summer. The reading program will culminate with a finale on July 13.

In addition to earning prizes as they progress toward their goals, children and young adults who complete the summer reading program will also be entered into drawings for a bike and Kindle Fire, respectively.

For more information about the summer reading program, including a calendar of events, visit Cityofalabaster.com/departments/library.