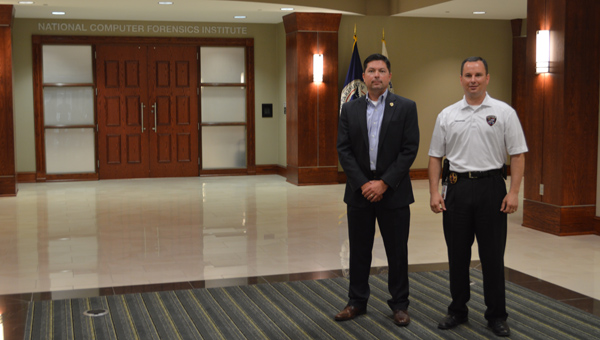 HOOVER— Narcotics units from all over the Birmingham metro area gathered for meeting at the Hoover Public Safety Center June 1 to share information and resources related to the fight against narcotics in the area.

The purpose of the meeting was collaboration, according to Shelby County Drug Enforcement Task Force Commander Lt. Clay Hammac.

“We are quickly realizing that our drug dealers and suppliers do not know city limits or county lines or even state lines,” he said. “The benefit of sharing information and coming together is imperative to maintain successful efforts to narcotics investigations.”

Many larger-scale organized narcotics investigations have many of the same target suspects in common, Hammac said, and working as a team can be imperative to working cases.

Hammac said the joint meetings were an initiative started by the Vestavia Police Department and are something new in the Birmingham metro area. This was the second information-sharing meeting.

“This is a force multiplier, pooling multiple resources, multiple investigative talents together to address a common problem, which is narcotics infiltrations here in the Birmingham, Jefferson (and) Shelby county areas,” Hammac said.

Drug use and drug acceptance is growing, especially in young adults, he said, leading to a softened cultural view of drug experimentation. Currently, Hammac said they are noticing an increased use in prescription narcotics, which often leads to other drug use, such as opiates and heroin.

Director of the Alabama Fusion Center Jay Moseley joined the narcotics agents, sharing information with officers about the resources available through the center.

The Fusion Center, he said, shares information with law enforcement agencies, first responders and private sector partners that have a nexus for investigating narcotics crimes. Each state has a Fusion Center, if not multiple ones.

“Our role here was to provide information, let them know what we can do for them and we talk about combatting the war on drugs,” Moseley said. “Sharing information is important. Not only sharing information with law enforcement, but in return taking their information, their intel, and sharing it statewide, sometimes nationwide.”

Another important partnership Hammac mentioned was the support of citizens. He said the community members have seemed to say, “Enough is enough,” and have become more proactive than he has ever seen before.

Working with the community is an advantage, and Hammac said the SCDETF has seen parents taking stances in Jefferson and Shelby counties to protect their children.

The plan is to continue to pool resources, information and efforts in the Birmingham area to combat drug use and large-scale operations, Hammac said.

“We are certainly grateful to Vestavia PD for starting this initiative and hope to continue it for many months to come,” he said.

Huntsville-based magician Russell Davis, right, pretends to hold up a barbell made of balloons during a June 1 magic show... read more