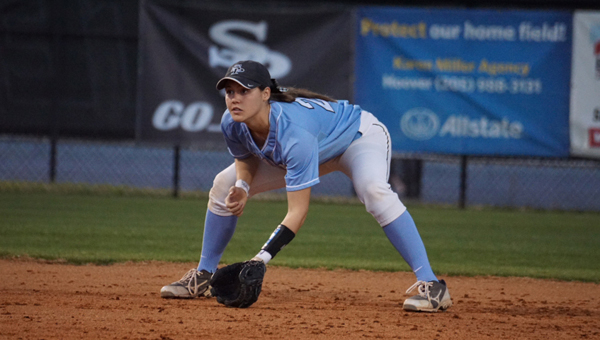 Spain Park’s Mary Katherine Tedder had a ridiculous 74 hits and 74 RBIs to go along with 20 home runs in her junior season, and helped lead the Lady Jaguars to the 7A state title game. (File)

Shelby County teams made appearances in the 5A, 6A and 7A state softball championship games this year, and softball as a whole was one of the county’s stronger sports in 2015-16. No other sport this year had three different county representatives compete for a state title in their respective classifications, and as a result the All-County lists were competitive this year. There are a ton of deserving players who were nominated in these All-County spots, and the players who did make the lists were some of the best in the state this year. So, let’s get to it with the 2016 All-County softball lists.

Pitcher: Sarah Cespedes, Chelsea, senior. Cespedes started 33 of Chelsea’s 43 games this year, and pitched in 35 of them. She pitched 191.5 cumulative innings and ended the year with a 22-8 record. While her usage was the highest of any pitcher in the county, her WHIP of 0.904 was the lowest, and her ERA of 1.68 placed her amongst the lowest ERAs in the county as well. She finished the year with 233 strikeouts as well as a .929 fielding percentage. Chelsea won the 6A softball title this season in large part behind the pitching performance of Cespedes, and she is the Player of the Year in the county. 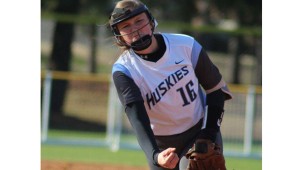 Helena’s Avery Barnett won 22 games this year, tied for the most in the county, and guided the Lady Huskies to the 5A state title game. (File)

Pitcher: Avery Barnett, Helena, freshman. The freshman Barnett helped lead Helena to the 5A state championship game, pitching 21 innings, giving up eight earned runs and striking out 19 batters in the first three games of the 5A state championship en route to a second-place finish. Over the course of the season, Barnett pitched 187 innings, went 22-11 on the year and struck out 166 batters while posting an ERA of 1.6. The youngster looks to be a staple of the Helena softball program for years to come. 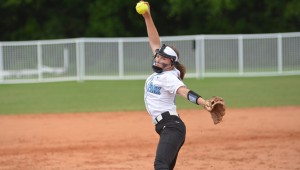 Annabelle Widra, the seventh-grade pitcher for Spain Park, came on strong for the Lady Jags in the second half of the season and was the staple from the mound for Spain Park during its state tournament run. (File)

Pitcher: Annabelle Widra, Spain Park, seventh grade. Speaking of impressive young arms, Widra came on strong in the back half of the season as Spain Park’s go-to ace. Widra did not pitch in a single game this season until March 5, but ended up pitching in 24 of Spain Park’s final 47 games, and started in 16. She accumulated a 13-5 overall record over 108 innings and finished the year with an ERA of 1.944. Widra also finished with a WHIP of 1.083 and 118 strikeouts, and pitched at least four innings in each of Spain Park’s six state tournament games.

Catcher: Cassady Greenwood, Oak Mountain, sophomore. The younger of the two Oak Mountain Greenwood sisters finished her sophomore year with a .349 batting average and accumulated 38 hits over 44 games. Greenwood also had 30 RBIs and five home runs as the youngster helped lead the Lady Eagles to 30 wins.

First Base: O’Neil Roberson, Oak Mountain, junior. Roberson ended the year with 65 hits, a .500 batting average, 71 RBIs and 21 home runs, all of which are incredible. Her 21 home runs were the most in the state this season, and Roberson was one of the driving offensive forces behind the Lady Eagles’ march to the Regional tournament. 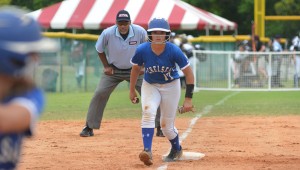 Chelsea’s Allie Miller had 69 hits in 43 games this year along with 17 stolen bases and an on-base percentage of .507 as she helped lead Chelsea to the 6A state championship. (File)

Second Base: Allie Miller, Chelsea, sophomore. Through 43 games this season, Chelsea’s sophomore second baseman Miller accumulated 69 hits, good for a .486 batting average, and had 26 RBIs to go along with three home runs. Miller also finished with a .507 on-base percentage and a .739 slugging percentage and 17 stolen bases for the Lady Hornets. From the field, Miller posted a fielding percentage of .957 on 140 chances, and helped guide Chelsea to the 6A state title.

Shortstop: Mary Katherine Tedder, Spain Park, junior. The sweet-swinging University of Texas commit did not miss one of Spain Park’s 59 games this season, and finished the year with 74 hits and 74 RBIs, both county-highs, as well as a .457 batting average and a whopping 20 home runs as well. Tedder was also walked 31 times on the year, and finished with an on-base percentage of .496. From the field, the sure-gloved junior posted a .917 fielding percentage and was the driving offensive force that propelled the Lady Jaguars to their second-place finish in 7A this year.

Third Base: Kynadi Tipler, Spain Park, senior. Tipler was not far off Tedder’s prodigious offensive production in her final season, as the Delaware State University commit had 70 hits to go along with 45 RBIs and 10 home runs in her senior campaign. Tipler also posted a batting average of .419 in 58 games, and was one of the top leadoff hitters in the state. She also finished with a .854 fielding percentage from the hot corner on 151 chances. 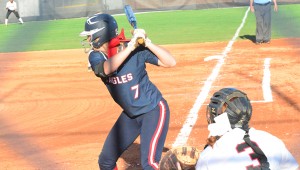 Oak Mountain’s Carmyn Greenwood hit .496, drove in 60 runs and had 62 hits over 44 games in her senior season, helping to lead Oak Mountain to 30 wins. (File)

Outfield: Carmyn Greenwood, Oak Mountain, senior. The older Greenwood sister hit .496 over 44 games, had 62 hits and drove in 60 runs in her final prep season. She also hit 12 home runs, and created a deadly one-two punch from the plate from the three-hole with Roberson batting cleanup.

Outfield: Amelia Moore, Briarwood, senior. Moore posted a fielding percentage of .938 for Briarwood in her final season as a Lady Lion and a batting average of over .300 as she helped lead Briarwood to the 6A Area 9 title.

Outfield: Mehki Mayfield, Helena, junior. Mayfield, who moved from her role as the Lady Huskies’ shortstop in her sophomore year to the outfield in her junior year, upped her batting average and number of hits this season. Mayfield finished the year with 55 hits in 48 games, good for more than one hit per game, and finished the year with 45 RBIs and six home runs as Helena finished as the 5A runner-up this year.

Pitcher: Megan Garst, Cornerstone Christian, senior. Finished the year with a 1.68 ERA and 224 strikeouts, the second-most in the county.

Pitcher: Abby Jones, Oak Mountain, junior. Finished with a 14-6 record along with 55 strikeouts and an ERA of 3.04.

Catcher: Charley Clark, Calera, sophomore. Finished the season with a .361 average and 21 RBIs to go along with three home runs. Also had an on-base percentage of .462 as well.

First Base: Chloe Yeager, Indian Springs, senior. Batted .550 in her senior season and drove in 22 runs while hitting two home runs. Had no errors on the season and also pitched in 11 games for Springs, going 7-4 on the year with an ERA of 0.850, the lowest in the county.

Second Base: Peri Clark, Shelby County, eighth grade. Clark hit .402 for Shelby County this year and finished the year with 50 RBIs, 11 home runs and an on-base percentage of .484.

Shortstop: Alex Smithson, Chelsea, senior. In 43 games Smithson had 55 hits and finished the year with a batting average of .455 and had 27 RBIs as well as an on-base percentage of .546 for the 6A state champion Lady Hornets.

Third Base: Dalton Merrill, Pelham, junior. Finished the year with a .373 batting average, 32 RBIs and six home runs for a Pelham team that won the 6A Area 8 title.

Outfield: Kenyah Speigner, Calera, freshman. Finished with a .368 batting average and an on-base percentage of .449 for Calera.

Outfield: Lauren Carter, Shelby County, sophomore. Finished with a .387 average and an on-base percentage of .467. Best defensive player on Shelby County’s team that won the 5A Area 8 title and won two games in the 5A South Central Regional tournament.

Helena High School will host a summer basketball camp June 27-30 for boys and girls in grades 1-8. (File) By... read more