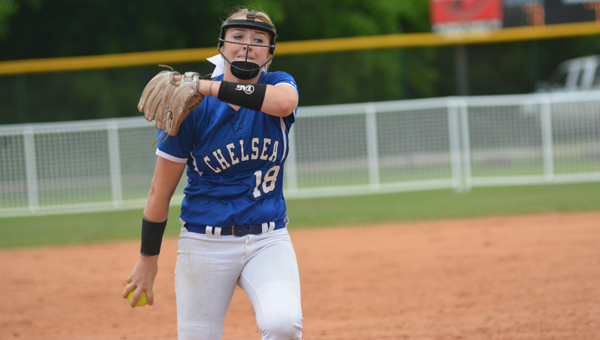 Chelsea’s Sarah Cespedes pitched in 35 games this year for the Lady Hornets, finishing the year with a 22-8 record and 233 strikeouts as she helped lead Chelsea to the 6A state title. (File)

This Chelsea team had a number of studs, including Allie Miller, Alex Smithson and Tristan Ziannis, but it was once again the pitching that paved the way for the Lady Hornets, as phenom sophomore pitcher Sarah Cespedes made the exceptional look consistently routine all season. Cespedes carried Chelsea to the 6A state championship this year, and is the 2016 Shelby County softball Player of the Year.

“Sarah is in the top one percent of pitchers I’ve seen in my life,” Chelsea head coach Heather Lee said of her ace. “She works extremely hard, she is extremely dedicated to what she does. She commands her pitches in a way you don’t see some college pitchers do. She is fierce, when she takes the rubber she is there to do a job, and she takes that very seriously.”

Cespedes definitely put up the stats this year, that much is obvious. She pitched in 35 of Chelsea’s 43 games, and started 33 of them. In the 33 games she started, her overall record was 22-8, which put her in a tie for the most outright wins in the county along with Helena’s Avery Barnett. She threw 191.2 innings worth of work, the most in the county, and finished the year with a 0.904 WHIP, which was the lowest in the county. Her 1.683 ERA was also one of the lowest around, and she struck out a whopping 233 batters on the season to go along with a fielding percentage of .929. She threw every pitch for Chelsea in the 6A state tournament as well, giving up just six earned runs and striking out 18 batters over four games against the best 6A competition in the state.

In sports, when one player is exceptionally dominant, that dominance has a way of seeping out to the rest of their team. Athletes recognize talent and production easily in their peers, and there is a universal, innate desire to produce at a high level when playing alongside a great player. There is an unspoken extra gear that athletes and teams can reach when one player is operating at an extremely high level, and that was what Cepsedes did for this Chelsea team, according to Lee.

“Sarah carries her own swagger,” Lee said. “If you’ve ever watched any team with a dominant pitcher, that (swagger) goes out to the rest of the team. When you are playing behind someone who is going to give every ounce of herself to every pitch, that makes everyone want to play that much harder. We didn’t make a ton of errors, but when she was pitching and someone made an error, the reaction was always, ‘I’m sorry, Sarah.’ No one wanted to let her down.”

Alongside her impressive athletic performance, Cespedes is a coach’s dream off the field as well, according to Lee, and is the prototypical type of leader any coach wants to build a program around.

“Off the field she is an exceptional student and person,” Lee added. “She has been raised to be a leader. Not one time did I have to check Sarah’s progress reports. She pushed herself academically just as much as she pushes herself athletically. For me as a coach, that’s exactly the type of athlete I want representing my school.”

The dominant pitcher for the best team in 6A this season, Sarah Cespedes is the 2016 Shelby County softball Player of the Year.

Spain Park’s Mary Katherine Tedder had a ridiculous 74 hits and 74 RBIs to go along with 20 home runs... read more