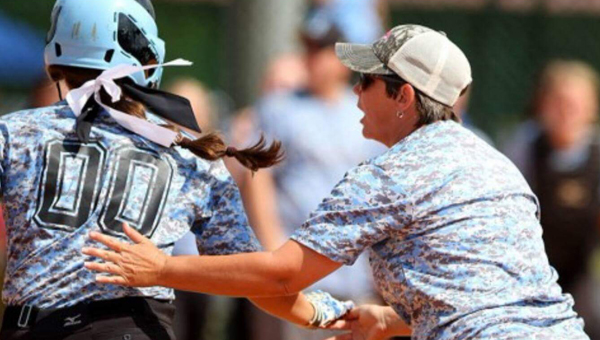 Helena head softball coach Heidi Kouveras led the Lady Huskies to the 5A state title game in the second year of the program’s existence, and is the Coach of the Year in the county. (Contributed)

In her second year as the head softball coach of the Lady Huskies, Heidi Kouveras made a concerted effort to test her girls at the beginning of the year, hoping it would pay off in the long run. A season ago, the first in the history of both the school and program, Helena finished a respectable 19-13-1 and made an appearance in the 5A South Central Regional tournament, where the Lady Huskies went 1-2. For a first-year school and a first-year program, an area title and a regional tournament win was nothing to be ashamed of, but Kouveras believed the program was capable of more.

As a result, Kouveras made sure to test her girls in 2016, loading the schedule with as many talented 6A and 7A schools as she could in preparation for a playoff run. The tougher schedule meant a slower start for this Helena team, and as of March 21 the Lady Huskies were middling around .500 at 10-8. However, as the season went on the Lady Huskies began to gain steam, and eventually nabbed the second seed out of the regional tournament this year, and parlayed that into a runner-up finish at the 5A state tournament. Because of the job Kouveras did at the helm of this Helena team, she is the 2016 Shelby County softball Coach of the Year.

Of course there were other coaches who could have been in this spot, as is always the case. Chelsea head coach Heather Lee won a 6A state title with her club, and the Lady Hornets dominated their opponent down the stretch under her guidance in her first year with the program. Spain Park head coach CJ Hawkins, one of the most well-versed softball gurus in the state, guided the Lady Jaguars to the 7A state title game as well with incredibly young pitching. Both of these coaches, along with Shelby County’s Ashley Phillips and Pelham’s Sabrina Tutchtone, did impressive jobs coaching their respective clubs this season, and strong cases could be made for each. So, with three teams making it to the state championship game of their respective class this year, why is this award being given to the coach of the team in the smallest classification?

For one, Helena was not playing with the same talent level as those other teams. While this team definitely had studs like Avery Barnett, Mehki Mayfield, KK Wilson and Katie Lively, the Lady Huskies didn’t have near the type of offensive firepower that Spain Park had with its murderers row of hitters in Mary Katherine Tedder, Kynadi Tipler, Julianna Cross, Jenna Olszewski, Destini England and Maddie Majors. And while Barnett had an outstanding freshman year from the mound, Helena did not have a lethal arm to rely on quite like Chelsea had in Sarah Cespedes.

Last season, after winning the 5A Area 8 title, Helena lost steam at the regional tournament, thanks in part to long, unforeseen delays in between games. This year Kouveras made sure to prepare for such a scenario, and set up a mid-tournament practice at Charles Henderson High School to keep her girls fresh. Helena whipped a very talented Shelby County team in the second round of the tournament before losing to Marbury in the winner’s bracket final, but bounced back with a 3-1 win over Demopolis to get into the state tournament as the South Central No. 2 seed.

In the state tournament, Helena beat Etowah in 10 innings before beating Marbury, the team that beat the Lady Huskies in the regional tournament, by a run to punch its ticket to the state championship game. The Lady Huskies lost twice to Springville, a team that lost its first game in the state tournament then proceeded to win six games in a row, and finished the year as the runners-up in 5A. While Helena lost 17 games this season and finished the year 32-17, Kouveras’ decision to frontload the schedule with talented opponents gave the Lady Huskies the in-game experience and confidence they needed to make a deep run in the 5A tournament in the program’s second year of existence.

While many were deserving of the award, Heidi Kouveras gets the nod as the 2016 Shelby County softball Coach of the Year.

Spain Park’s Mary Katherine Tedder had a ridiculous 74 hits and 74 RBIs to go along with 20 home runs... read more