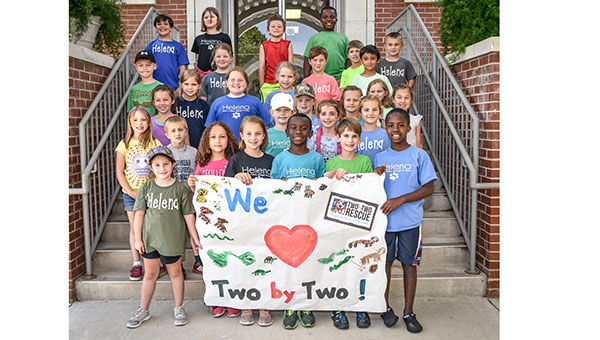 HES first and second grade peer helpers helped raise $500 for Two by Two Rescue and participated in numerous other activities throughout the school year. (Contributed)

Throughout the year, the students looked for ways to help others, such as with navigating friendships and resolving conflicts.

The HES Peer Helpers ended the year with two culminating activities. The peer helpers planned and facilitated a service project benefitting Two by Two Rescue of Helena and during the fundraiser collected almost $500 in donations from students participating in pajama day at school.

The Peer Helpers ended the year with a graduation ceremony and during the ceremony, they were encouraged by HES administrators Mary Cooper and Kara Burleson, school resource officer Casey O’Farrell and school counselors Maegan Vick and Shelly Johnson about the opportunity to be lifelong helpers in their school, home and community.