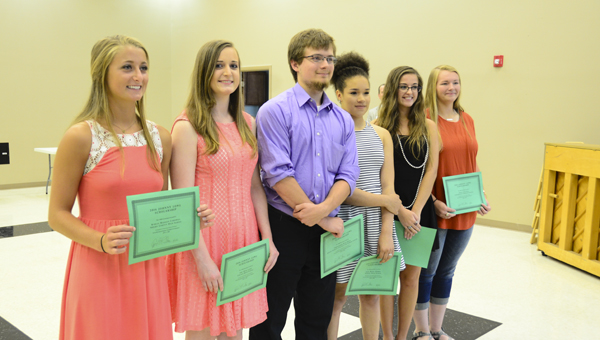 COLUMBIANA – A sizable crowd gathered June 2 at First Baptist Church of Columbiana to honor six local students receiving scholarships from the South Shelby Chamber of Commerce and to hear an update on the Shelby County School System.

The Chamber was able to award $6,000 in scholarships to students this year because of generous donations and bidding at the annual silent auction, Executive Director April Stone said.

Last year, the Chamber awarded three $1,000 scholarships, which are designated for graduating seniors from public and private schools in the southern region of the county.

The following is a list of academic honors and involvement for each of this year’s scholarship recipients:

She will attend Troy University in the fall and plans to major in education, specializing in special needs.

She will attend the University of Alabama at Birmingham in the fall and major in chemistry.

She plans to become a pharmacist.

He will attend Lawson State Community College and major in automotive technician.

He will then pursue an ASE Certification.

She will attend Florida State University, where she will major in biological sciences.

She plans to attend medical school with a doctorate degree in physical therapy.

She will attend Auburn University in the fall and major in biomedical sciences with the ultimate goal of attending medical school to become a cardiovascular surgeon.

She will attend Jefferson State Community College, and then plans to transfer to Samford University and major in pharmacy.

For the love of plants: Driggers’ gardening, honey business continues to grow

Don and Ruth Driggers, owners of Vincent Gardens and Southern Roots and Blooms, walk through rows of plants at their... read more