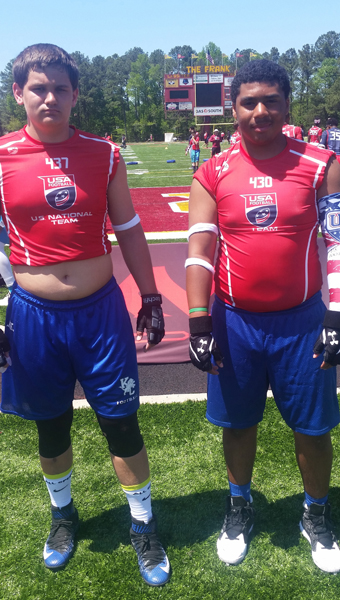 Kingwood Christian freshman Charles Parkinson, left, and Calera freshman Ryan Caver will travel to Canton, Ohio from July 19-23 to try out for the USA Football U15 National Team. (Contributed)

CANTON, Ohio – From July 19-23, some of the top young football talent from across the country will descend on the home of the NFL Hall of Fame for a week of drills, practices and games. USA Football, the national governing body for amateur American football, is hosting a National Team Developmental Camp from July 19-23 at Walsh University in Canton, Ohio, from which players will be selected to compete in Dallas in January of 2017 at the national level.

Athletes qualified for the National Team Development Camp by being selected from one of the many Regional Development Camps that USA Football hosts across the country. The players who are selected from the regional camps represent some of the most talented youngsters across the country, and two of those youngsters are from Shelby County in Ryan Caver and Charles Parkinson.

Caver is a six-foot, 220-pound rising freshman at Calera, while Parkinson is a 6-foot-2-inch, 235-pound rising freshman at Kingwood Christian School. This will be Parkinson’s first year at Kingwood, as he spent his middle school years at Chelsea, and the two became familiar with each other over their middle school careers. It was not until this past December that they became close, however, as both took part in an All-Star game in Myrtle Beach. The two recognized each other from middle school competition and struck up a friendship. Now the two have a chance to represent their country playing a game they love.

Both qualified for the National Developmental Camp after being selected as some of the top lineman from the Atlanta Regional Camp that took place over the weekend of May 28. They are both massive for their age, Parkinson is 15 and Caver turns 14 on June 6, and have been competing in regional and national camps for years now. However, this chance to represent their country is a unique one.

“As soon as I found out there was a national football team for USA, I was determined to make it,” Caver said. “The fact I got selected from Atlanta was exciting.”

Caver, who lists JJ Watt and Cam Newton as his two favorite NFL players, has a pretty simple goal for what he wants do to in Ohio.

“I want to get pancakes,” he said. “I want to dominate. Sometimes, if coaches see that you’re good enough right away, they’ll let you know you’ve made it. That’s what I want, to dominate.”

Parkinson, an Alabama fan whose favorite player is Evan Mathis, has a similar, singular goal as well.

“I want to go out there and do great. I want to dominate,” he said.

The camp will be a week-long endeavor that will include 1-on-1 drills, group non-contact work, seven-on-seven drills and a full scrimmage at the end of the week, where players will be evaluated and selected to represent the United States in the U15 Developmental Games in Dallas, which will take place in January of 2017.