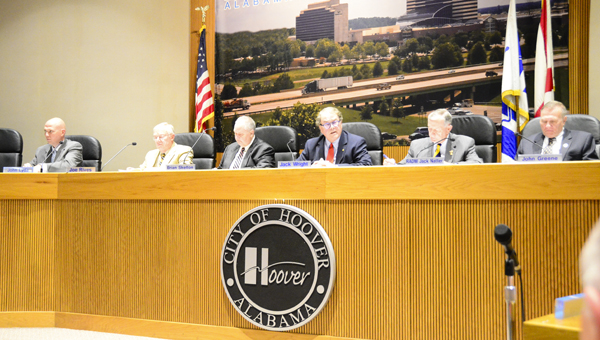 The Hoover City Council engages in discussion at a June 6 meeting, where members passed ordinances on the regulation of door-to-door peddlers and allowing individuals to carry firearms in city parks. (Reporter Photo/Emily Sparacino)

HOOVER – The Hoover City Council has approved ordinances amending the city’s municipal code regarding door-to-door solicitation and peddling regulations and individuals carrying firearms at public parks owned by the city.

Both ordinances came before the council in May for discussion and revision prior to their approval at a June 6 meeting.

Ordinance No. 16-2301 restricts the hours of operation for door-to-door solicitors in city limits, requires solicitors to apply for licenses and pass criminal background checks to receive a permit from the Hoover Department of Revenue and allows the Hoover Police Department to enforce the regulations.

During the council’s discussion before voting, Councilman Jack Natter voiced concern about the origin of the companies that have communicated with the city and expressed opinions about the solicitation and peddling ordinance.

Attorney Frank Young with Red Mountain Law Group in Birmingham spoke on behalf of Vivint, a smart home technology provider based in Utah, and said the company wanted Hoover to adopt an ordinance extending the hours of operation for door-to-door peddlers past 6 p.m., especially in the summertime.

The company employs licensed solicitors and technicians, Young said, who provide services more so than products.

“The 6 o’clock (end time) is, frankly, unworkable for the purposes of our company,” Young said to the council.

Daniel Snyder, an attorney in Birmingham, also cited concerns about the time constraints as he spoke to the council on behalf of Southwestern Advantage, a company for which college students sell products door-to-door.

Snyder said the students work for the company as “independent contractors” during the summer when they are out of school.

In response to a resident’s question about the consequences for peddlers who visit neighborhoods with signs prohibiting soliciting, Councilman John Lyda said peddlers cannot enter such neighborhoods lawfully.

The previous ordinance – which cites previous complaints from residents about solicitation practices and potential safety risks – allowed peddlers to approach private residences between 9 a.m. and 7 p.m.

The council voted to amend the ordinance to limit peddler hours of operation to 9 a.m. to 6 p.m. or sunset, whichever comes first.

The city received a complaint from the Alabama Attorney General’s Office that revealed Hoover is in violation of state firearms law because it prohibited firearms in city athletic parks, lake parks, passive or playground parks and preserves.

According to the ordinance, the city has signage posted at each of its parks “prohibiting the possession or carrying of the same on such park property,” and was given until May 16 to modify ordinances regulating firearms and to remove signs prohibiting firearms at city parks.

“This does not include any school campus property,” Councilman Gene Smith said, noting city schools can still prohibit firearms because they are owned by the Board of Education, not the city.

Open carry can still be prohibited at public locations with controlled access. Schools, school athletic facilities and the Hoover Recreation Center are covered under the proposed amendments since each has controlled access, such as a security guard or sign-in system.