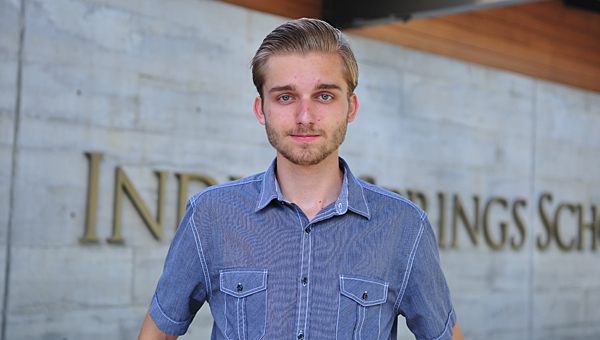 By TYRA JACKSON / Special to the Reporter

INDIAN SPRINGS – Indian Springs School junior Davis Tyler-Dudley can now add a perfect score of 36 on the ACT exam to his list of accomplishments.

On April 8, Tyler-Dudley took the exam for the first time, after he said he looked at the exam as a test run for what he could improve on when taking future ACT exams.

“Going into the exam, I didn’t know how I would do,” Tyler-Dudley said. “After I got out, I was pretty sure I was going to score high, but not that high.”

The ACT exam is a college readiness exam that tests high school students in subjects such as English, reading, math and science. The four components of the test are scored individually on a scale of 1-36, and an average of the scores are used to provide a composite score.

The junior said he was elated when he got the email showing his results, while sitting in his history class.

As for choosing a major, Tyler-Dudley said he’s not quite sure, yet. He said he definitely knows it will have to be related to international studies.

“I’ve been leaning towards international business, relations, law or something with an international influence. I attribute that to my school because we have a lot of international students that I’m exposed to,” he said.

Tyler-Dudley wasn’t the only one excited when he received his score, because his parents Stewart and Ahrian Dudley also celebrated his achievement.

“I had a feeling he would do well,” Ahrian Dudley said. “He’s that kind of kid. I’m very proud of him for making the score.”

Although, Dudley said she is overwhelmed with joy, she is more proud of the person her son is because he always puts others first.

“He is a bit of an old soul,” she said. “Academics are one factor, but treating people kindly is equally important.”

In fact, Tyler-Dudley isn’t just a high scorer. He is a leader at his school. He is a former participant of the University of Alabama Capstone Leadership Academy, an elected member of Spring’s Student Government and Judiciary. In addition, he is the co-captain of Indian Springs School’s Mock Trial Team. As a former commissioner of education at Indian Springs, Tyler-Dudley said he loved lending his skills to other students who might need assistance with their academics.

“I’m extremely lucky at what I’ve gotten, as far as family circumstances,” he said. “I try to help those who are not as fortunate as I am.”

At the end of the day, the score is just a number that doesn’t define much, Tyler-Dudley said.

“I don’t believe test scores say that much about people,” he said. “It doesn’t show how hard of a worker someone is or how nice they are.”

One arrested for murder in Montevallo’s Almont Community