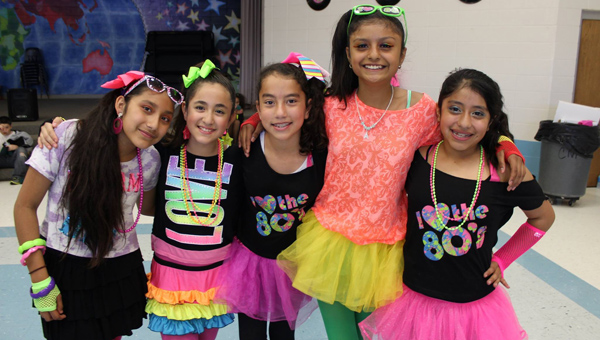 Valley Intermediate’s fifth-grade dance allowed students to deck out in decade attire ranging from the ‘50s to ‘90s. (Contributed)

PELHAM— To celebrate the end of the school year, Valley Intermediate fifth-graders decked out in bellbottom pants, ‘60s afros and Jane Fonda fitness suits for a decades dance.

The dance signified not only the culmination of the 2015-2016 school year, but also marked the next chapter in the students’ lives as they prepare to transition to middle school.

“They’ve worked so hard. The other grades, they have end of the year parties, but none of the other grades do a dance,” said VIS teacher Holly Laney. “These kids talk about this dance on the first day of school. They are so excited, and so it’s just a great culminating opportunity for them to celebrate their academic success.”

The fifth-grade dance is an annual event, and Laney and Christine Downing helped coordinate the dance for the students with help from the PTO parents.

When Downing started at VIS 11 years ago, she said the dance was always a sock-hop and transitioned into an ‘80s theme a couple years later to better fit the personalities of the teachers.

“This year we decided to incorporate more decades in order to give a little bit more opportunity for students to get with a decade they identified with,” Downing said.

Parents and students alike decked out in decade attire. Laney and Downing said some of their favorite costumes were the Pink Ladies and the T-birds, flower child outfits and the neon ‘80s get-ups.

The PTO parents even created “Straight outta VIS” water bottle koozies for all the students.

Both teachers said the kids seemed to have a great time at the dance, once they got into it, Laney said.

“They always start out just standing around, but by the end it turns into the bunny hop or the train going around the lunchroom,” she said. “You get to see students doing their favorite dance move. It’s very entertaining.”

The event also gave students an opportunity to relax and enjoy themselves after a year of following rules and expectations, Laney said. Downing added it was also good for the students to see the teachers in a more casual atmosphere.

A time capsule was also part of this year’s end of the year tradition for fifth-graders. Laney said the students all filled out forms listing their favorite songs, movies, books and other information about themselves.

The PTO parents created a box for all the forms with plans to open the capsule in 2023 right before the students graduate from Pelham High School.

“(This is) to show them how much they’ve grown, and it’s really special because they are the last graduating class from Valley Intermediate,” Downing said.

Despite rain, CityFest a success

Members of Black Jacket Symphony perform Fleetwood Mac’s “Tusk” during the Alabaster CityFest on June 4, as they are joined... read more