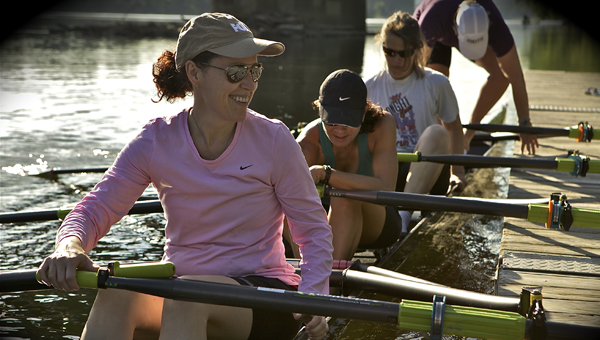 Lara Embry and Ted Swinford will be the two coaches of Birmingham Area Youth Rowing, which is starting with summer camps June 20 on Lake Purdy. (Contributed)

NORTH SHELBY – Youth rowing is coming to the Birmingham area. Through the efforts of US rowing legend Ted Swinford and long-time friend Lara Embry, Birmingham Area Youth Rowing, which will exist alongside the already-present Lake Purdy Rowing Association, will start this summer. The club will put on weekly, half-day rowing clubs starting the week of June 18 and will run through August before launching into its first fall schedule.

Swinford is a decorated rower on the national stage and was inducted into the US National Rowing Hall of Fame in 1997. He won a gold medal at the 1986 World Rowing Championships, won seven gold medals in his career at the US National Championships and was a member of the 1988 Olympic rowing team that traveled to South Korea. He has been coaching youth rowing in some capacity for the last 20 years, and met Embry in Florida when the two were coaching the Sarasota Scullers in Sarasota, Fla.

Embry, a Birmingham native and an Indian Springs School alumnus, got involved with rowing when she attended Smith College in Massachusetts, and has been involved with the sport ever since. When she moved back to the Birmingham area with her family, she was excited to discover she could continue the sport, but wanted a way for her children to get involved as well.

“When I moved back (to Birmingham) I was excited there was a master’s rowing program (23-years-old and up) on Lake Purdy,” Embry said. “But there was no youth team.”

Jackie Majors, the head coach of the Lake Purdy Rowing Association and an Olympic bronze medalist in the 1976 games, had been looking for a youth coach, according to Embry, but hadn’t been able to find a willing and qualified coach. Embry reached out to her old friend, and discovered that Swinford, who is currently living in Philadelphia, was interested in taking on a new challenge. After travelling to Birmingham to get the lay of the land in December of 2015, Swinford decided to become the first head coach of Birmingham Area Youth Rowing in February.

Swinford credited Embry’s eagerness and judgment, as well as the general upbeat nature of the people he met in Birmingham, as reason enough to relocate the 800-plus miles to start this team from scratch.

“Lara’s enthusiasm for it, for sure,” Embry said. “I trust her judgment. The people I met down there really seemed like people who wanted to get something going. And I’m looking for a new environment myself.”

Embry, like any parent, is particular about who coaches her children, and speaks highly of Swinford’s coaching ability. She is also a child psychologist who received her PhD from the University of Washington, and therefore is more qualified than most to speak intelligently on any individuals’ ability to positively affect children.

“He is unbelievable,” she said. “He’s a great guy, smart, and kind, and is great at helping kids.”

Swinford is coming to start a program from scratch in a sport that has began to permeate the south in recent years, but has left Alabama relatively untouched. While starting a new program from nothing can be daunting, especially a program in a sport with little name recognition in the area, Swinford is confident the program can be a success.

“I’m a competitive person,” Swinford said. “My goal would be to create a program that can compete on the regional level if not the national level. That will take some time, but at least have some impact on the Southeast region in general. At the same time I enjoy seeing young athletes achieve their goals. I enjoy being a part of that, being a part of their lives.”

Swinford will move to Birmingham permanently around June 18, and the first camp will begin June 20. The camps are $150 for the week, and they will run from the week of June 20 to the week of Aug. 8. After which point the BAYR will begin its first fall season. What the inaugural fall season will look like in terms of competition dates and team numbers is still being figured out, according to Swinford, and the goal is to be headed in an obviously positive direction at the end of the fall.

“We’re working that out now,” he said. “We want to emerge from the fall feeling like our training is going well and our enthusiasm is in a good place.”

For more information on the youth rowing summer camps and the BAYR, visit Bhamyouthrowing.org.