As the saying goes, you never have a second chance to make a first impression.

For Lesa Nivens, owner of Gail’s Florist in Columbiana, her first impression was so good that she is now the florist of choice for the PGA tour.

“I did an arrangement in January 2015, and sent it out,” explained Nivens. “The client called and she was amazed by the arrangement. She (the client) had owned a large catering company in Birmingham for years.” 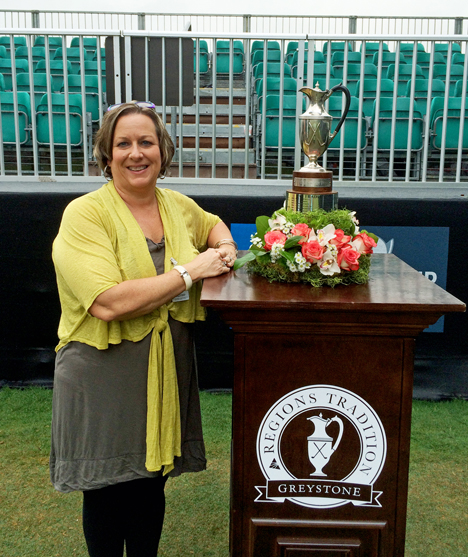 Lesa Nivens, owner of Gail’s Florist in Columbiana, stands next to the trophy stand at the recent Regions Traditions golf tournament at Greystone. Nivens is the florist of choice for the PGA Tour. (Contributed)

It just so happens that the client’s daughter was with the PGA Tournament. After a few letters of recommendations were written, Nivens was selected by the PGA to provide all the arrangements and plants for the event.

The 2016 Regions Tradition, which is part of the PGA Tour Champions, was May 18-22 at Greystone Golf Club.

Shortly after the conclusion of the tournament, Nivens received the news that her contract with the PGA has been renewed through 2019.

As one can imagine, preparing for such a large event requires a lot of work.

She estimated that she and her staff spent over 400 hours on the tournament. Nivens credits a great staff for making it all possible.

For Nivens, who has an extensive background in the corporate world, events like the Regions Tradition tournament are what she enjoys best.

She said she also enjoys every aspect of being a florist. “From birthdays, to funerals to wedding events, I just love my job,” she said.

Nivens bought Gail’s Florist three years ago. At one time the shop had been owned by her aunt and uncle.

When it became available for purchase, Nivens was thrilled to have the opportunity to buy it and move back to the county she grew up in.

“My family has been in the area for over 150 years,” she said. “My roots are deep and wide in Shelby County.”