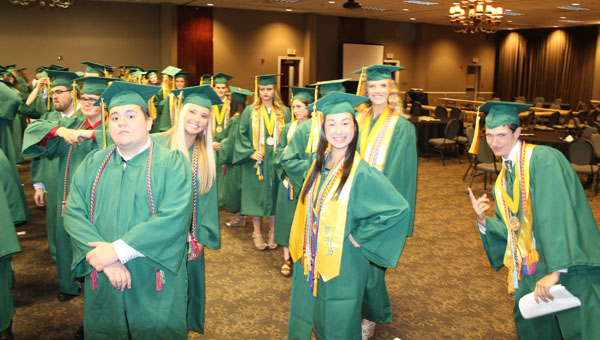 The PHS Class of 2016 lines up for their last walk together. (Contributed)

“We are the Class of Tweet ’16,” Pelham High School Class President Jenna Bennett said beginning her welcoming speech to the PHS 2016 Graduation Ceremony.

Bennett’s speech was rich with the history of her class, with the tradition of Pelham High School and with her love for her school expressed with poignant emotion.

The Class of Tweet ’16 was aptly named by English teacher Rebecca Burnett whose son was in this extraordinary class.

As Camp Pelham director for this group’s incoming freshman, Burnett’s connection to these students drove her to make their entire high school experience amazing.

Tweet ’16 captures this class. They are sweet and connected—to their school and all of the friends who have ever been with them at PHS.

Indeed, several of us have been to more than one graduation this past week to see the Class of ’16 begin their great commencement.

In PHS Valedictorian Peyton Strickland’s speech, he celebrated the athletic, artistic, musical and academic achievements of his classmates. He also celebrated their kindness.

The valedictorian’s remembrance of his teachers was both humorous and touching as he shared many memories including the “the belief that I can do anything instilled by Mrs. Nelson.”

Strickland said that he was not worried about the uncertain future ahead, because he and his classmates are part of a generation of intelligence, love and kindness.

“Thank you all from the bottom of my heart for everything—and, forever and always, it will be a great day to be a Panther,” said Strickland.

The PHS Class of 2016 will thrive because, as they live reflective and mindful lives focused on others, they will continually experience the greatest happiness of all—the joy of gratitude.

Men and Women of Letters