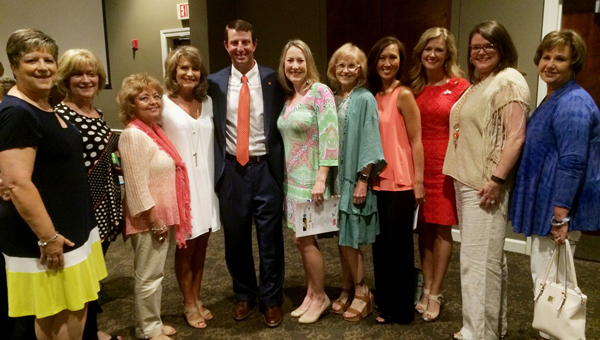 Miss Shelby County Hayley Barber worked hard to make certain the Making Miracles luncheon on May 16was a success, and she certainly exceeded all expectations.

The luncheon, which featured Clemson head coach Dabo Swinney as speaker, raised over $30,000 for Children’s Hospital and Children’s Miracle Network.

As hostess for the event, which was held at the Pelham Civic Complex, Barber funded the event cost through donations from area businesses and individuals.

Members of the club prepared the centerpieces for 40 tables. Sponsorship for a table of eight was $500.

The banquet room was filled to capacity as Coach Swinney spoke to the crowd about his philosophy on coaching and on life.

“True success is when you realize, and when you know, that God blesses you so you can bless others,” said Swinney.

Both Swinney and Barber are Pelham natives. Swinney said he loves coming home to Pelham, which is where he lived from the age of 4.

“I want the young people here to be able to look at me and be encouraged that they can grow up in Pelham and be equipped and prepared to go do great things in life,” Swinney explained.

At the end of the program, Pelham City Council President Rick Hayes recognized Barber as an Outstanding Community Champion and praised her for organizing the luncheon.

Barber clearly has a heart for helping children. Her platform, Sight for Small Eyes, promotes awareness of the need for comprehensive eye exams for children before they reach kindergarten to reduce disabilities that can result from poor vision.

Barber will compete June 11-16for the title of Miss Alabama. Miss Alabama is a preliminary for the Miss America Pageant. She finished as second runner-up in the 2015 pageant.

The pageant will take place at Shelby County High School at 7 p.m.