Faith Blair has been chosen to represent Calera High School at the 2016 session of American Legion Auxiliary Alabama Girls State, held on the campus of the University of Alabama.

For one week, she will become a citizen of an imaginary state, taking part in the political life of her community, primarily through campaigning for and electing city, county and state offices. 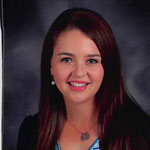 She will learn the operation of government by participating in party caucuses and through the election process.

Well known speakers and other state, county and city officials are expected to visit and enlighten the young women on their civic responsibilities.

Blair plans to campaign for the office of City Council.

Blair will speak to her sponsoring organization and to other organizations upon invitation about her experiences at American Legion Auxiliary Alabama Girls State.

The daughter of Edward and Lori Blair and the granddaughter of Mr. and Mrs. William H. Blair of Calera and Johnny Jones Jr. of Montevallo, Blair was selected to attend the American Legion Auxiliary’s Alabama Girls State because of her outstanding leadership.

Sponsored by the American Legion Auxiliary, Alabama Girls State is a laboratory of practical government, and a personal application of the duties, responsibilities and privileges of being an American.