Cheer camp leads to slew of trophies for Pelham 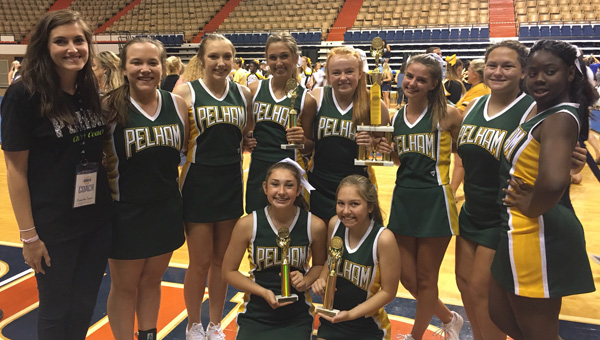 “It’s amazing to see that they truly take away how all this hard work has paid off,” said coach Samantha Simpson. “At the end of it, I think they realize how important it is to do their best work and come away feeling accomplished.”

Last year, Pelham sent one large squad comprised of both the varsity and junior varsity cheerleaders, but this year, Simpson said their numbers were great enough to compete separately.

At camp, the athletes are prepared for an actual game day scenario, according to Simpson. Instead of teaching the cheerleaders as many routines and cheers as possible, they focus on perfecting a few.

Each of the groups were taught the same dance routine, and then one of five sidelines and one of five cheers. Then the teams were able to add their own twists, such as tumbling, stunts, signs or more.

“I think the number one thing they learn at camp is to get along with each other and create a team bond…it really helps them to rely on each other,” Simpson said.

When the competition starts, Simpson said the judges simulate an actual game experience. Instead of calling them out to the field and telling them to begin, they called out game day situations, such as “The Panthers just scored a touchdown.”

Then the cheerleaders react with a cheer or routine, Simpson said.

The varsity cheerleaders also earned a gold superior ribbon in home pom routine, along with fourth in sideline and third in extreme dance competition.

Because football season at Pelham has the girls constantly practicing, Simpson said the extensive work of the cheer camp helped prepare the cheerleaders. It helped build muscle memory, she said, and she thinks it will help them balance their practices with schoolwork, family, friends and more.