Hammett named Coach of the Year 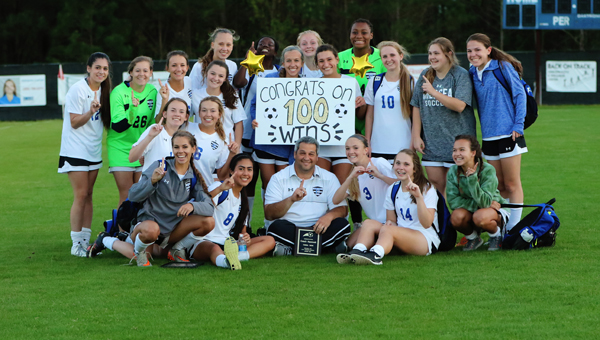 Jonathan Hammett (center) led his Chelsea Lady Hornets to a season-ending No. 3 ranking in 6A with a 13-8 record, and is the Coach of the Year in Shelby County. (File)

The Chelsea Lady Hornets finished the 2016 season as the No. 3 team in Class 6A with a 13-8 record. In the regular season Chelsea’s losses came to 7A powers Hoover, Oak Mountain (twice), Vestavia and Mountain Brook, while the Lady Hornets also dropped a game to 6A power John Carroll Catholic, as five of Chelsea’s seven regular season losses came at the hands of teams ranked in the top three of their respective class. The tough schedule worked favorably for the Lady Hornets, as they spent much of the season ranked in the top four of the 6A class, and were able to gain some crucial experience against top competition.

Head girls coach Jonathan Hammett, who came to Chelsea in 2009 and won a 5A state title in 2012, had one of the most talented rosters this season that he has had in his time with the Lady Hornets, but also one of the youngest. The combination of senior midfielder Sophie Wilson, junior forward Madeline Guillen and the underclassmen trio of Maddison Martin, Haley Greene and Lexie Duca combined to give Chelsea nearly 70 percent of its scoring on the year, and all made either the First or Second All-County teams. While this team was full of talent and ability, it was still overwhelmingly young, and was prone to mental lapses that led, at times, to discouraged play.

However, Hammett and his girls stayed the course through the regular season, which was trying at times, and rounded into form in the postseason when it mattered most. For the job Hammett did this year with this talented, young team, he is the 2016 Shelby County girls soccer Coach of the Year.

The job Hammett did with this team can be understood most clearly by what his Lady Hornets did against perennial 6A power John Carroll Catholic this season. On April 7, Chelsea walked off their home pitch nursing a tough, emotionally devastating 6-1 loss to John Carroll. The game had been billed as one of the top matchups in the state, as John Carroll was the top-ranked 6A team in the state at the time and Chelsea was right behind the Lady Cavaliers at No. 2. However, Chelsea had been unable to capitalize on its chances, as John Carroll Catholic leapt on the Lady Hornets early and never looked back.

The loss dropped Chelsea to 10-5 on the season, and left the Lady Hornets in a pickle. To make any kind of run in the 6A postseason tournament, Chelsea was going to have to get past John Carroll in the second round of the playoffs, an unfortunate reality of geography. The girls from John Carroll have had a stranglehold on the 6A ranks for years now, winning the 6A title three years in a row from 2013-15, and were the odds-on favorite to win the Blue Map trophy for the fourth year in a row. Chelsea, sporting one of its most talented rosters in years, represented the best, local chance to beat John Carroll, but had come up well short in the regular season meeting.

After Chelsea beat Homewood in the opening round of the 6A playoffs, the Lady Hornets travelled to John Carroll for a rematch, with a third round playoff berth on the line. Chelsea was without the services of their senior leader Wilson, who was recovering from a shoulder injury suffered against Briarwood late in the regular season. As a result, Chelsea went into the game with no senior starters.

Down 3-1 with less than 20 minutes left in the game, the season looked bleak for the Lady Hornets. However, the resiliency that had been hammered into the team of youngsters over the course of the season came to the surface in those final 20 minutes, and Chelsea scored twice to tie the game and force overtime.

Chelsea eventually lost to John Carroll, losing in the eighth round of penalty kicks in one of the most thrilling games of the season, and the Lady Cavaliers went on to win their fourth consecutive 6A state title. After beating Chelsea in eight rounds of penalty kicks, John Carroll won its next three games by a combined score of 5-0, and did not give up a goal to any team in the postseason except for Chelsea.

Hammett pulled inspiration this season from famed Oregon distance runner Steve Prefontaine’s quote, “to give anything less than your best is to sacrifice the gift,” as well as Proverbs 27:17, which states “as iron sharpens iron, so one man sharpens another.” Both speak to the same sort of resiliency and work ethic that Hammett drilled into this years Chelsea team, which paid off down the stretch and will undoubtedly pay off in spades in the years to come, and for that he is the Shelby County Coach of the Year in 2016.