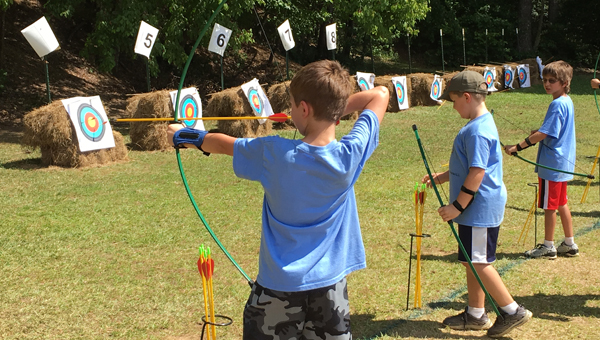 The theme of the camp was Cub Scout Investigations, and from 2 p.m. to 7:30 p.m. the Scouts rotated through activities, such as field sports, archery, BB guns, crafts and badge work.

Each of the Scouts began work for four to six badges over the five-day camp, and will complete the requirements for those badges with their home packs at a later date, White said.

Forensics is one of the featured badges of the 2016 summer camp. White said the Scouts made copies of their shoe prints on a piece of construction paper, and then analyzed the print.

“Most of the time (the favorite) is BB and archery,” White said of the activities. “They get to shoot and shoot and shoot, but this year our field sports have been the highlight of the week.”

White attributes the success of field sports to the new director, who was a former Boy Scout volunteer. They added him to the team, and he created several competitions the Scouts love, White said.

The activities include competitions, such as relay races and tug of war.

“The field sports build teamwork,” White said. “A lot of times you see the same kids at school, so this gives them the opportunity to meet new kids at summer camp that they may never have met before.”

At the culmination of the camp, White said all the Scouts seemed to have a great time. Each Scout will also receive a brand on their walking sticks to commemorate this year’s camp.

“I like seeing them learn,” White said. “Some of the stuff they aren’t going to remember, but they will remember competing up at the field sports and being together.”