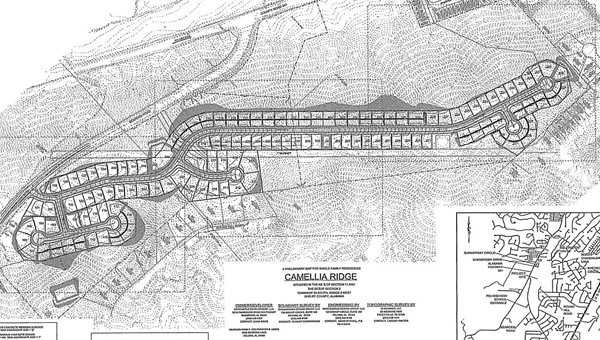 The preliminary plat for Camellia Ridge off Bearden Road, proposes a 126-lot community of garden homes ranging from the $200,000s to the $300,000s, depending on the lot size. (Contributed)

The 56-acre lot, located off Bearden Road across from Pelham High School, was rezoned from a Residential Townhouse District to a Residential Garden Home District in February after a decision by the City Council.

At the June 9 meeting, Newcastle Development was seeking approval for three phases of its development, consisting of 126 homes with price points in the low $200,000s to $300,000s.

“Obviously we are concerned about property values, security, water lines,” said North Chandalar resident Raymond Hayden. “The reasons we aren’t putting it at another entrance—power lines and slopes—and you have that where we are. I think the ulterior motive is, it’s just a shorter distance. The dollar signs, I think, are a big play.”

The fire access road would run through Hayden’s property, and he and his wife came out in opposition against the development, along with several of their neighbors.

After hearing the concerns, Joe Schifano with Engineering Design Group asked the Planning Commission to consider only approving Phase One of the project, which would not require the fire access road.

“As it’s come to light today, there are obviously issues we misunderstood completely,” Schifano said. “It was not our intent to come in and do anything that was going to cause this kind of grief.”

Phase One would allow Newcastle Development to build and complete 30 homes. In the meantime, Schifano said they would do more studies to develop a different location for the access road.

Civic engineer Wade Lowery explained that the plans for the development are designed to meet the city of Pelham’s storm water and erosion control ordinances as well as regulations set by the Alabama Department of Environmental Management.

“I’m not going to present anything that I wouldn’t be proud of or that I would be ashamed of,” Lowery said.

Ultimately, leadership with Newcastle Development elected to withdraw the 126-lot proposal with plans to submit a 30-lot proposal for Phase One at the July Planning Commission meeting.