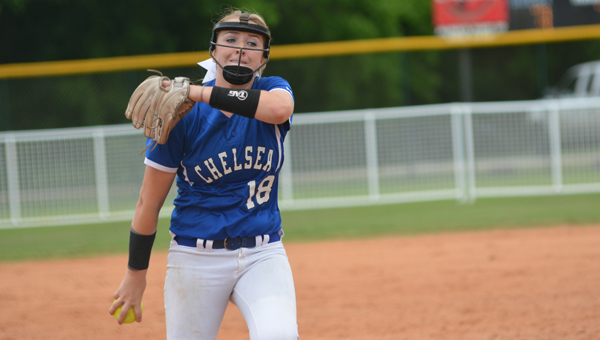 Sarah Cespedes was one of 16 Shelby County players to be make the ASWA All-State softball lists. (File)

The ASWA All-State softball teams were released on June 10, and 16 Shelby County names made the lists. Helena was the most well represented county team, with four players getting a nod, while Oak Mountain and Spain Park each had three players in the 7A ranks and Cornerstone Christian had three make the cut as well on the AISA teams, 6A state champion Chelsea had two players make the cut and Briarwood had one player on the list as well.

Shelby County also had two Coaches of the Year as well in Chelsea’s Heather Lee and Helena’s Heidi Kouveras. Kouveras, the 2016 Shelby County Coach of the Year, helped lead Helena to the 5A state title game in the program’s second year of existence, while Lee marched Chelsea to its second-ever state championship in her first year with the program.

Mary Katherine Tedder was named to the 7A First Team as a designated hitter and was also named the 7A Player of the Year after leading Spain Park to the 7A state championship game, while Oak Mountain’s O’Neil Roberson was also named a 7A First Team designated hitter and was named the Hitter of the Year in the class as well. Roberson posted a ridiculous stat line this season that included 65 hits in 44 games, a .500 batting average, 71 RBIs and a state-leading 21 home runs. Tedder’s year was just as impressive, as the junior shortstop amassed 74 hits in 59 games, smacked 20 home runs and drove in 74 runs as well.

Tedder was the only Lady Jaguar to make the 7A First Team, as seventh-grader Annabelle Widra and senior Kynadi Tipler both made the Second Team, Widra as a pitcher and Tipler as a designated hitter. Roberson and senior outfielder Carmyn Greenwood made the 7A First Team for the Oak Mountain team that won 30 games this spring, while senior shortstop Ashlee Sanders made the Second Team for the Lady Eagles.

Shelby County Player of the Year Sarah Cespedes was the only Chelsea player to make the 6A First Team, and classmate Allie Miller was the only other Lady Hornet selected as a Second Team utility player. Briarwood’s Rachel Walz also made the 6A Honorable Mention list as a shortstop.

Helena, the team with more nominations than any other, did not put one player on the 5A First Team, but rather had three on the Second Team as well as an Honorable Mention. Freshman pitcher Avery Barnett, junior outfielder Mehki Mayfield and freshman Katie Lively, who pitched and played outfield for the Lady Huskies but was nominated as a designated hitter, all made the Second Team while junior catcher Maggie Blanton made the cut as an Honorable Mention.