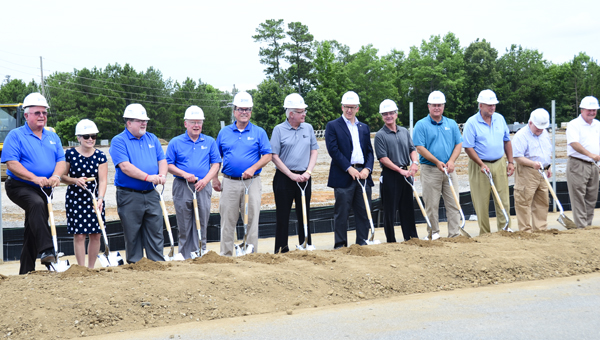 Donning hard hats, Hoover city officials and other dignitaries dip shovels into the dirt at a June 14 groundbreaking ceremony for the new Hoover Sports and Events Center, which will be located on 120 acres next to the Hoover Metropolitan Stadium. (Reporter Photo/Emily Sparacino)

HOOVER – City officials broke ground June 14 at the Hoover Sports and Events Center site, signaling the start of the first phase of the roughly $76 million project.

“It’s an exciting day for us,” Hoover Mayor Gary Ivey said to the large gathering of dignitaries, project leaders, business representatives and residents at the groundbreaking ceremony. “I think this is going to make the city of Hoover a destination city.”

The facility will be situated on 120 acres next to the Hoover Metropolitan Stadium, the longtime venue for the Southeastern Conference Baseball Tournament, which SEC athletic directors voted earlier this month to keep in Hoover following discussions of potentially relocating the tournament to another city.

The project calls for the construction of an indoor events center, outdoor sports fields, a tennis complex and RV park expansion.

Hoover City Council President Jack Wright cited Hoover’s growth from a “little town” of nearly 400 people in the 1960s to a burgeoning city with a population of about 86,000, and noted millions of people come to the Hoover Met each year.

“Hoover has come a long way, and Hoover is going in the right direction,” Wright said. 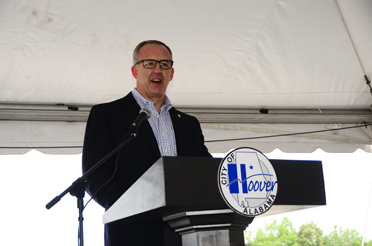 Southeastern Conference Commissioner Greg Sankey speaks to those gathered at the groundbreaking ceremony for the Hoover Sports and Events Center on the morning of June 14. (Reporter Photo/Emily Sparacino)

The events center will be designed to accommodate a variety of events and sports activities and will feature enough space for 11 regulation-size basketball courts or 17 regulation-size volleyball courts, trade shows for 300 booths or 2,400-seat banquets and theatre-style seating for 5,000 people.

The existing RV park will expand from 149 to 172 spaces with full hook-ups, and additional parking will create about 5,000 spaces on-site.

“Many hours have been put in to make this project a reality,” said City Councilman Joe Rives, who serves as a liaison with the Parks and Recreation Board.

Goodwyn, Mills and Cawood are handling the architectural and engineering services for the facility. Brasfield and Gorrie General Contractors are over construction management.

The first phase of the project – the indoor events center – is set for completion by May 2017, in time for the next SEC Baseball Tournament.

The outdoor fields will be finished in February 2018.

SEC Commissioner Greg Sankey called the bidding for SEC Baseball Tournament hosting rights a “close race,” but said no other city could provide a campus like Hoover’s, particularly with the amenities the new sports and events center will bring and the centrality of the complex.

“We have a wonderful history, and we have an incredible tournament,” Sankey said. “We have a baseball tournament in about 50 weeks. We’re in it.”

The Greater Birmingham Convention and Visitors Bureau estimated the economic impact of the facility for Hoover to fall between $27 million and $33 million a year.

“What’s happening here today is the beginning of a great future for youth sports in our area,” Oros said. “For Hoover and all of Greater Birmingham, this is another example of the area’s commitment to youth and amateur sports.”