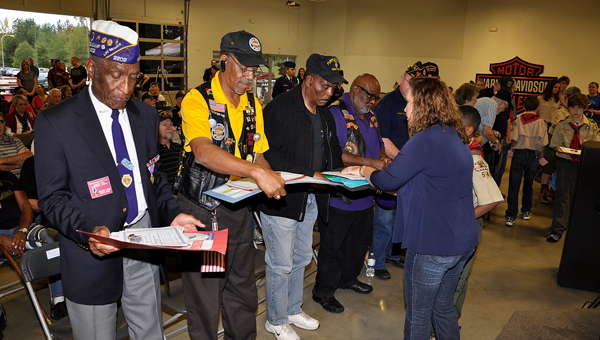 PELHAM— It’s been close to one year since the Exchange Club of Shelby County was chartered in Pelham on July 9, 2015, and the 23-member group has already seen success among the national organization.

“We’ve done a lot this year,” said President-elect Coni Fievet-Crawford. “I’m excited about how much we’ve been able to get out into the community. We really did a lot in the child abuse prevention, which is the national project.”

Joyce Franklin received Volunteer of the Year award for 2016.

The club sponsored an oratory contest participant, Aaron Wilkes, who took first place at the district level. Wilkes received $600 and will compete at the national level.

Exchange Club’s Youth of the Year, Connor Barnett, also participated in a swearing in ceremony for the Navy at the city of Pelham’s Flag Day Celebration June 12.

Fievet-Crawford said she attributes the success of the club to its dedicated members.

“I’m very excited and I’m excited the direction the club is going,” she said. “We had a big board meeting and decided the projects we wanted to do this coming year and different things we really want to hone in on.”

The board selected at least two events in each pillar of the Exchange Club to participate in, and Fievet-Crawford said the club has the freedom to take on additional projects later on.

The ACE Award is something she said she’s passionate about. It’s a scholarship program that concentrates on a youth that struggled in some area or somewhere had a bad life experience, but managed to get through it to be able to graduate and go to college.

The club will also focus on awarding another Youth of the Year and partnering with the American Legion Matthew Blount Post 555, while also participating in Military Appreciation Night, Bubbles of Love for child abuse prevention, the Blue Ribbon Bash, Backpack Buddies and Christmas for CAP children.

Fievet-Crawford will take over as president July 1. She said she’s excited to continue the work of the club and give back to the community.

“I’m just excited to take over,” she said. “This has been a lot of learning…I’m excited to see what direction we can go and continue to make a difference in the community.”