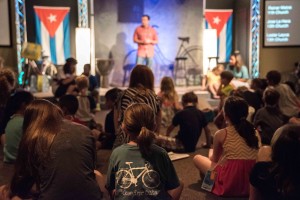 Students at Valleydale Church’s vacation bible school pray for pastors doing missionary work in Cuba. VBS was able to raise more than $7,800 to provide bikes for the missionaries.

NORTH SHELBY – Two hundred and sixty kids attended Vacation Bible School at Valleydale Church for what has become a “summer tradition” for many. Valleydale children’s pastor Chuck McCammon said this year the kids at VBS went beneath the surface with their theme “Submerged” to explore the relationship between the student’s spirituality and physical self.

“You may see yourself one way, and not like it,” McCammon said. “But God sees you differently and no matter what loves you.”

“Submerged” is a VBS guide distributed by Lifeway Christian and its teachings are taken from Psalm 139: 23-24 which reads, “Search me, O God, and know my heart: try me, and know my thoughts. And see if there be any wicked way in me, and lead me in the way everlasting.”

Throughout the week McCammon said the students were learning about people from the Bible, who on the surface were not good people but changed when they accepted the gospel.

The students participated in different classes and activities throughout the week in different daily stations such as recreation and missions. In missions the kids were able to talk about missionary pastors in Cuba and raise money for Bikes for Cuba, an initiative to provide the missionaries with bikes.

First grader Jackson Brainard said he liked missions because they got to pray and help people in another country. He said he hopes “the kids in Cuba can learn about Jesus” and they can raise the money needed to get the missionaries bikes.

Meredith Woods, Valleydale creative arts manager, said they were able to raise more than $7,850, which will buy more than 20 bikes for the pastors in Cuba.

The mission has been a large part of VBS and been included with the storyline of the week’s drama, which followed a cast of characters bringing the bikes to Cuba by submarine.

Janya Piedra, 11, said the drama was her favorite part of the week and thought it was a fun way to see the Bikes for Cuba goal realized, and help the pastors in their missionary work.

“I like how the drama and stories we learned connect,” Piedra said. “It showed me Christ can change our lives forever.”

McCammon said VBS is a large operation to pull together and is a “church wide effort.” He said more than 150 volunteers came together to make sure the week was successful.

Erica Faircloth has volunteered at Valleydale VBS for 15 years and said it’s been an “amazing blessing to see the children learn.” Faircloth said she started volunteering when her oldest son went to his first VBS and has been involved since in different roles of teaching, music and hospitality.

“The Lord was laying on my heart the importance to serve,” Faircloth said. “A lot of prayer has gone into it, from me and everybody helping with VBS.”

McCammon echoed that prayer and planning are synonymous in preparing for VBS and they have already begun planning for 2017.

“It’s a 24/7 all year long planning process,” McCammon said. “But something I look forward to every year.”