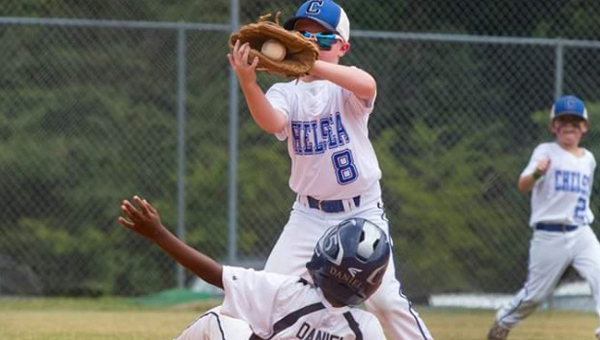 CHELSEA – The Chelsea 8U Powerhouse captured the 8U title at the third annual Summa Sizzla baseball tournament in Chelsea over the June 11 weekend, while the 7U Chelsea Punishers brought home the championship in their age division as well.

The Summa Sizzla tournament has grown to be one of the largest summer baseball tournaments in the state, and the city hosted 33 teams from all over the mid-state region this year.

The road wasn’t easy for the Powerhouse, as they survived a tight battle with another Chelsea team, the Rec’n Ballz in the semi-finals in a game where the lead changed hands four times. Rec’n Ballz first baseman Kong Kenright blasted a one-out double to the left field wall to give his team a two-run lead in the third inning. 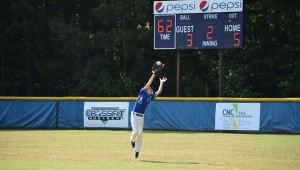 Chelsea Powerhouse centerfielder Cooper Johnsey snags a shot to the outfield during the Summa Sizzla. (Contributed)

The Powerhouse, coached by former Alabama Crimson Tide legend Chris Moller, are masters of the long ball. They were hitting them long, but Rec’n Ballz outfielder Owen Edwards was snagging everything that came his way. In the top of the sixth inning, the Powerhouse used a couple of blasts by leftfielder Jacob Rearden and pitcher Brock Garrett to open things up, and the Powerhouse eventually won by seven runs. Powerhouse catcher Ethan Prickett drove in the game winning RBI with a double in the left center gap.

The championship game was one for the ages as the Powerhouse took on Shelby County, led by one of the top coaching staffs in the state. Head coach Ricky Ruzzton and assistant Jeremy Pennington, Layne Young and Doug Portis led Shelby County to the championship of the Shelby County Invitational a week prior to the Summa Sizzla.

“When Shelby County walks in from the parking lot, you know that you are going to have your hands full,” tournament co-director Mike McNamee said. “There isn’t an easy out in their lineup.”

Moller’s team had plenty of firepower as well. Nursing a one-run lead in the top of the third inning, Powerhouse shortstop Grant Hill launched a bases-loaded blast to the right centerfield wall for a grand slam to give the Powerhouse a little breathing room. Shelby County put four runs on the board in the bottom of the fifth to crawl within five runs, but the Powerhouse clinched the game in the final inning with two more runs.

The Cinderella story of the tournament belonged to the Chelsea Fury, coached by former UAB catcher Sean Harris. After going 0-3 in their first tournament of the summer, the Fury had the standing-room-only crowd at the Chelsea ballpark going crazy Friday night as they stunned North Chilton with a 19-12 upset.

“I couldn’t tell if I was at a baseball game or a Justin Bieber concert,” Chelsea Baseball Board member Chris Vickers said. “The Fury had the whole town jacked up with that win.”

That wasn’t it for the Fury when it came to excitement in the Sizzla. Down seven runs in the final inning of the consolation quarterfinals to Pelham, the Fury mounted an almost unbelievable comeback led by outfield “Bruiser” Riggins and scored seven runs to tie the game and send it into extra innings. Pelham ended up defeating the Fury by one run.

In the 7U age group of the Sizzla, the Punishers, led by Coach Shelby Neil went 5-0 in the tournament, including an 18-4 win over North Chilton in the championship game. Luke Neil had 8 putouts from his second base spot in the finals.

The most exciting moment of the day for the Punishers came in a semi-final matchup with a very good Clay team. With the Punishers needing one run to clinch the game on a run rule, into the batter’s box stepped Price Bittner. Bases were loaded and Clay moved the infield in for Bittner as the entire park thought he would attempt to bunt in the winning run. However, Bittner took the next fastball and drove it 180 feet to the left field wall for the walk off RBI, and was named 7U MVP for the tournament.

The 7U Chelsea Blue Bandits also had a memorable tournament as they opened the tourney with a grudge match against Millbrook.

“These were two very even teams and you just knew from the first pitch that it was going to be a tight game,” Chelsea baseball commissioner David Ingram said.

A tight game it was until Chelsea’s River Hill roped a single in to right center field to score Landon Brittain from third base in the bottom of the sixth to give the Blue Bandits an 11-10 victory.

The Chelsea Powerhouse, Rec’n Ballz and Fury play this weekend in the 8U District tournament held at Chelsea, while the Punishers and the Blue Bandits will play in the 7U tournament in Leeds.