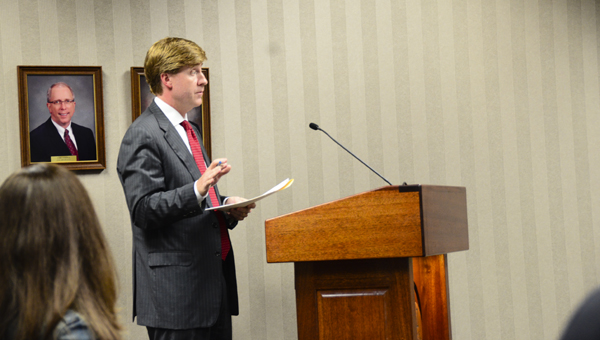 HOOVER – The Hoover City Board of Education is facing decisions regarding Jefferson County’s renewal of the ad valorem tax set to expire in the next few years.

Board counsel Whit Colvin explained the status of the taxes that fund the school system and suggested the board take action soon with the Jefferson County ad valorem tax, which will expire in 2021.

“The Board of Education is funded by state and local funds, mostly ad valorem tax voted into effect by the people,” Colvin said. “Hoover has 13.9 mills of district-wide taxes that will expire at some time in 2020 as countywide taxes.”

In Jefferson County, the Hoover school district has 8.2 mills in countywide taxes, of which .7 mills never expire, he said. Others were last voted on in 1991 and have to be renewed. The district also has 24 mills in the city.

Colvin said any school board can issue a petition to the county commission asking for a vote on the taxes to be scheduled.

“It’s funding you already have,” Colvin said of the taxes, which aren’t new. “It’s your lifeblood.”

Hoover’s share of countywide taxes is $7 million on a per-child basis, and as the third-largest school district in Jefferson County, Hoover has more than 9,000 students in schools in the county, Colvin said.

Hoover City Schools Superintendent Dr. Kathy Murphy said the board would incur a cost of about $4 per student, or roughly $37,000, to employ a consulting firm to assist and support the board in the tax referendum.

When asked about ad valorem tax expiration in Shelby County, Colvin said the votes have been held more recently, meaning their renewal will be later than the Jefferson County tax.

Colvin recommended the board adopt a resolution to submit to the county commission regarding the tax renewal. Murphy said the board will continue reviewing the matter and revisit it at the July board meeting.