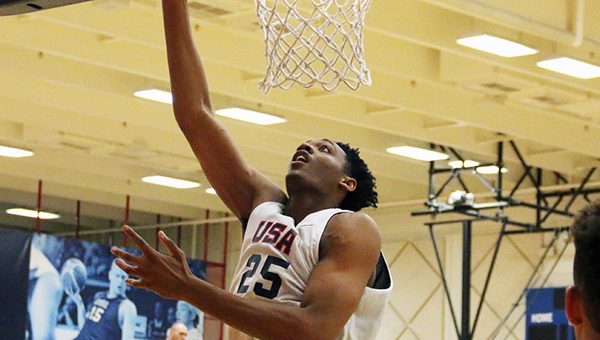 Spain Park’s Austin Wiley has made the USA Basketball Men’s U17 World Championship Team that will compete in Zaragoza, Spain from June 23-July 3. (Contributed)

COLORADO SPRINGS, Colo. – Spain Park’s Austin Wiley has made the USA Basketball Men’s U17 World Championship Team. Wiley, a rising senior at Spain Park High School, was one of 36 athletes to be invited to the camp, which started on June 10, and was selected as one of the final 12 athletes to make the final cut for the team on June 12 that will play in the FIBA U17 World Championship.

“We always look for guys who are versatile and can play multiple positions and I think we have that,” Don Showalter, the head coach of the U17 team, wrote in a press release. “I like our size, and when you go play international at this level, you are going to play against bigger bodies. I also think we have a good mix of shooters and slashers.

“Our guys like Wendell Carter, Markus Howard, Kevin Knox II and Gary Trent Jr., who we had last year, are really good players. Austin Wiley is a guy that wasn’t with us last year and he’s improved a lot. I’ve been involved since 2009, and this may have been one of the toughest years we’ve had, because these kids competed so hard. There wasn’t one player that checked out going into the last practice. I think all 18 guys had a legitimate chance of making this team, which made this so hard.”

The training camp was used to determine the 12-man roster that will now represent the United States at the 2016 FIBA U17 Men’s World Championship, which is being held in Zaragoza, Spain, from June 23-July 3. The USA earned its qualifying spot for the Worlds by winning gold at the FIBA Americas U16 Championship back in June of 2015 with a 5-0 record.

Wiley, a five-star prospect currently verbally committed to Auburn, made the team along with some of the top prep names in the country in the 2017 class. Carter, Knox, Trent, Howard, Jordan Brown, Javonte Smart and Robert Woodard, all of who were on the U16 team that won gold in 2015, made the team this year as well.

The camp ended on June 17 as the team prepares to make the trek to Europe. Once in Spain, the United States will face Taiwan on June 23 and will face Turkey on June 24. Following a day off, the USA will cap preliminary play against Egypt on June 26, at which point all teams playing will advance to the round of 16 on June 28. Winners from the round of 16 will advance to the medal round quarterfinals on June 30. The semifinals will be played on July 2 and the finals will be on July 3.

The FIBA U17 World Championship was first held in 2010, and is now held every two years. The USA has earned the gold medal in all three editions, compiling a perfect 23-0 record overall. Current NBA players Bradley Beal, Jahlil Okaford and Justice Winslow are a few of the names that have played in the FIBA Worlds to date.