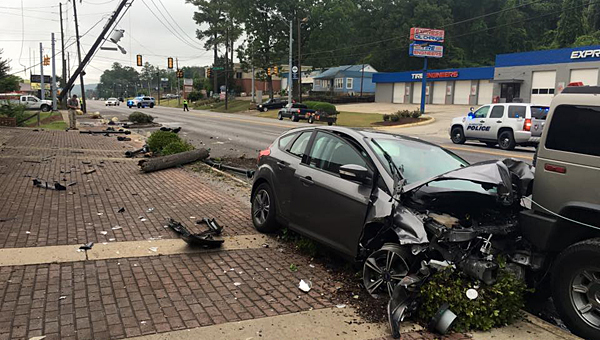 The Alabaster Police Department closed U.S. 31 on the morning of June 15 after a wreck damaged a power pole in old downtown Alabaster. (Contributed)

ALABASTER –The Alabaster Police Department has re-opened U.S. 31 and Alabama Power crews have completed repairs after an early morning wreck damaged a power pole and caused power outages in the area on June 15. No injuries were reported in the wreck, according to Alabaster Fire Chief Jim Golden. 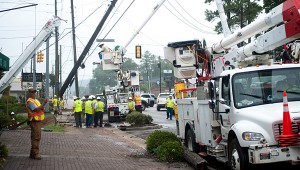 The wreck happened shortly before 7 a.m. when a Ford Focus traveling southbound on U.S. 31 left the roadway and struck a power pole and several sidewalk streetlights about a block south of the Alabaster Police Department.

The vehicle then struck a Hummer H2 parked on the side of the road before coming to a stop.

Alabama Power crews arrived on the scene shortly after the wreck and began working to repair the power pole and restore electricity to the area, and completed repairs shortly before noon.

Alabaster Police officers also responded to the scene to divert traffic off of U.S. 31, and warned drivers to expect significant delays in the area. As of noon on June 15, all lanes of U.S. 31 had re-opened to traffic, according to Alabaster police.