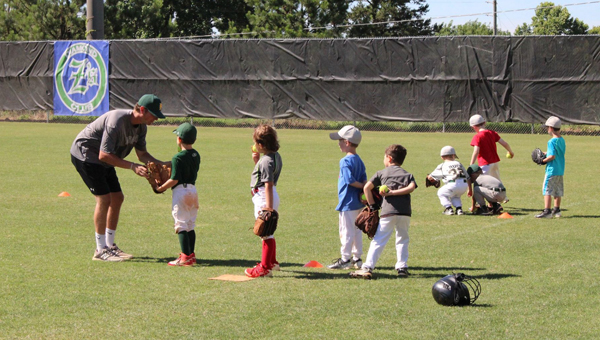 Each day from 8:30 a.m. until noon, students entering kindergarten to eighth grade had the opportunity to learn from the coaching staff at Pelham High and Riverchase Middle schools, along with three PHS alumni.

“We had a blast,” said head baseball coach Sean Anderson. “I think the kids had a good time. I know our coaches and our alumni guys that helped out did.”

Anderson said the camp focused on all facets and fundamentals of the game, tailored toward each age and level, as well as having fun on the field.

Pelham has hosted this baseball camp for the past 12 to 15 years, according to Anderson, and he said it started taking off about 10 years ago.

“It helps our kids in the community learn to the play the game,” he added. “Hopefully, if they spend a few years in the camp, they’ll be a little bit more knowledgeable and become part of the program.”

The kids responded well to working with both the coaches and the alumni, Anderson said. He chose to bring the three alumni back because he knew they were great at both teaching the kids and having fun with them.

This year, the camp saw 38 kids out on the field, which Anderson said is a typical number for them.

One of the favorite activities for the 38 participants, he said, was slide day. The coaches soaked down an area of the field by third base and made it slippery. What started out as learning proper sliding techniques turned into a lot of fun, Anderson said.

While learning the game and taking something beneficial from the camp is important, Anderson said the most important thing is having a good time.

“(My favorite part is seeing) the interaction with our kids and coaches with the young kids and watching the kids have fun playing baseball,” he said. “To me that’s the most important thing is to have fun playing the sport.”