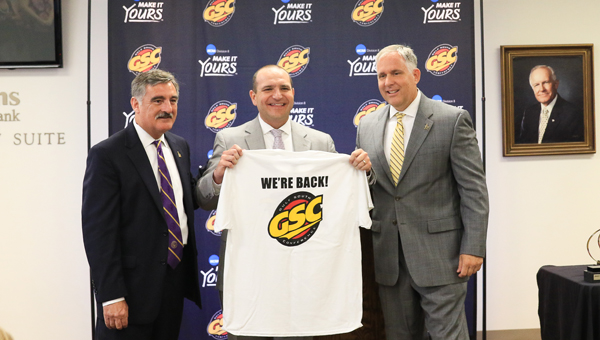 Montevallo won six conference titles and five regular season titles over that 14-year span from 1995-2009, and have been one of the premier athletic programs in the Peach Belt since 2009. The Falcons’ culminating achievement to date in the Peach Belt was in 2011-12 when the men’s basketball team made its first appearance in the NCAA Division II National Championship game.

“It’s a great day to be a Falcon,” University of Montevallo President John Stewart III said. “We are happy to be returning home to the Gulf South.”

The Peach Belt Conference currently is made up of 15 teams from South Carolina, North Carolina, Georgia, Florida and Alabama. The only two schools currently from Alabama in the conference are the University of Auburn at Montgomery and Montevallo, both of which are transferring to the GSC. In the Gulf South, Montevallo will be one of the most centrally located members, making travel time less of a problem.

The Gulf South Conference is a charter member of the NCAA Division II dating back to its creation in the summer of 1970, and GSC teams have claimed 50 NCAA Division II national championships in 13 sports since that time.