Fourteen awarded by ESGR in Pelham 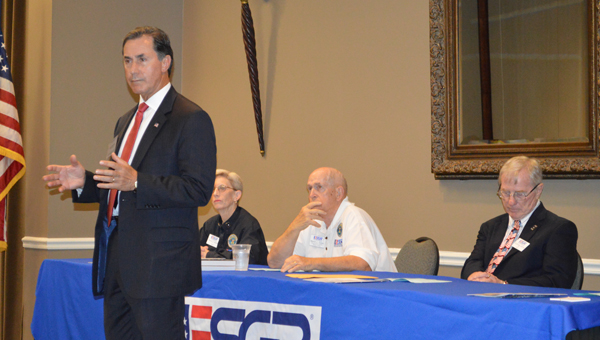 PELHAM— To celebrate dedication for assisting and honoring veterans, the Employer Support of the Guard and Reserve Alabama Committee District 6 recognized 14 individuals at a June 17 awards program.

A few dozen community leaders, residents and business owners gathered at the Pelham Civic Complex from 11 a.m. to 1:30 p.m. for the event.

“For those of us who have served in the military before, our term of service at some point ended, but our responsibility to defend and protect the rights of the veterans never ends,” Pelham Mayor Gary Waters said in his welcome address.

The awards are given to those employers who go above and beyond to work with military personnel, giving them the required time off and guaranteeing they have a job when they get back.

Congressman Gary Palmer was a Seven Seals Awards recipient, and he also addressed the attendees about the importance of the RSGR organization.

Palmer was one of 10 other individuals who received the Seven Seals Award. The award is presented in recognition of significant individual or organizational achievement, initiative or support that promotes and supports the ESGR mission.

The following individuals were also awarded the Seven Seals Award:

“(ESGR) started with the realization that we were getting away from the draft and we were going to use reserves and guardsmen for supporting us,” said Dr. Bill Kringel. “We realized employers supporting the guard and reserve was critical for our way of life.”