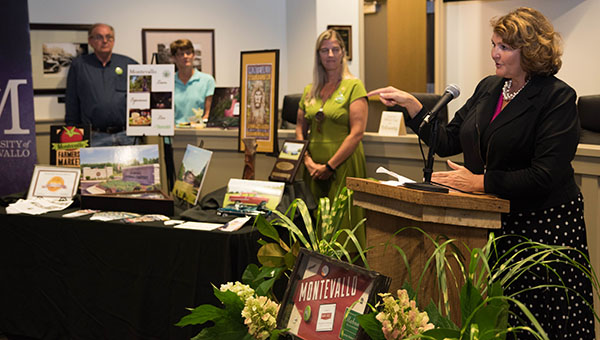 Montevallo and Columbiana were two Shelby County communities selected on June 1 for the program after each city participated in a rigorous, five-month competitive application process to be considered for the program.

The program on June 14, kicked off a downtown revitalization in Montevallo and Montevallo Mayor Hollie Cost; Cam Ward, R–Alabaster; Matt Fridy, R-Montevallo; and Main Street Alabama President and State Coordinator Mary Helmer were all in attendance to celebrate the recent achievement.

“We’re thrilled to have this designation,” Cost said. “This is a very special time in Montevallo’s history and through this Main Street designation what I would like to see, is I would like to see the word potential separated from the city of Montevallo. We often talk about the potential and that Montevallo has so much potential, well we hope through this Main Street designation that we will not only be able to meet our potential but that we will be able to be the destination that we’ve all felt like we were from the very beginning.”

The program was followed by a “Taste of Main Street” where restaurants in Montevallo’s downtown district such as Jack’s, El Agave, Smitherman’s, KFC, Pizza Hut, Subway, Happy Dollar, Eclipse, Fox and Pheasant and more all offered samples to those at the celebration.

“Main Street really is about capturing the excitement, it’s about capturing the enthusiasm and capturing your work ethic here in Montevallo,” said Helmer. “We’re so pleased to have you on board. Welcome to the Main Street family and we’re thrilled you’re one of our 20 designated communities across the state of Alabama joining in other 27 downtown networks in a highly successful program.”

The cities will report their success by tracking their reinvestment statistics. Main Street Alabama’s Designated communities have reported 239 net new businesses, 2,392 net new jobs, $187.3 million in private investment, $32.6 million in public improvements, and 26,652 volunteer hours in their districts collectively since June of 2014.

Fridy, who lives in Montevallo and serves as the representative for Alabama House District 73, said the designation should “come as no surprise.”

“For those of us who love the city of Montevallo and I live in Montevallo, it should come as no surprise. Montevallo is an amazing place that will be made all the more so by its partnership with Main Street,” Fridy said.

Applications to become a Designated Main Street Community will be available in spring 2017. Until then, communities interested in downtown revitalization can participate in Main Street Alabama’s Downtown Network.

UPDATED: One eastbound lane of U.S. 280 at Highland Lakes re-opened