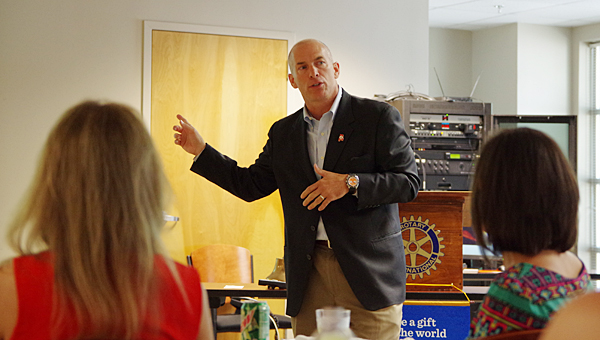 ALABASTER – The World Games could bring a more than $250 million economic impact to the Birmingham metropolitan area, including Shelby County, in 2021, the executive director of the Alabama Sports Hall of Fame told the Alabaster-Pelham Rotary Club during a June 16 meeting.

The ASHOF worked with the city of Birmingham to submit the bid for the World Games in 2014, and the city beat out two other finalists in 2015 to host the games in five years.

ASHOF Executive Director Scott Myers said the games likely will be an economic boon for the metro area, and will bring sports many locals are not familiar with.

“The opportunity to bid and win this was really a community effort. We put our best foot forward,” Myers told the Rotary Club during a June 16 meeting at Shelby Baptist Medical Center. “When you’ve got a $256 million economic impact spread across the region, everyone wins in that scenario.”

Myers said he became interested in the World Games after visiting them in Colombia in July 2013. After returning, he began meeting with local officials to gauge their interest in bidding for the games to come to Birmingham.

“We realized that all of the venues they would need, we’ve got them in place right now in our community,” Myers said, noting the city had to secure the endorsement of the U.S. Olympic Committee before bidding. “Every person we talked to along the way loved the idea (of bidding).”

The World Games narrowed the field of 2021 host cities to Birmingham, Lima, Peru, and Ufa, Russia.

After the committee visited the candidate cities, the cities presented their cases to the World Games in Switzerland in January 2015. A short time later, Birmingham was notified it had been chosen as the 2021 host city.

Myers said unlike the other two finalists, most of the funding for Birmingham’s campaign is coming from corporate dollars, not government funding.

In addition to facilities such as the Birmingham-Jefferson Convention Complex, the Birmingham Crossplex and Barber Motorsports Park, the World Games also will utilize Oak Mountain State Park in Pelham for events such as wakeboarding, skiing and orienteering.

Because the World Games and the Olympics do not feature any of the same sports, the World Games will bring sports unfamiliar to many locals, such as korfball, which is similar to basketball.

In total, the games will bring about 4,500 athletes representing more than 100 countries, 900 credentialed media members and about 40 sports, Myers said.

“When you talk about 100 countries coming to our area, you’re taking about having an opportunity to do some great things in the community,” Myers said. “We are building relationships across the globe, and that will help the Birmingham metro area in a big way.”