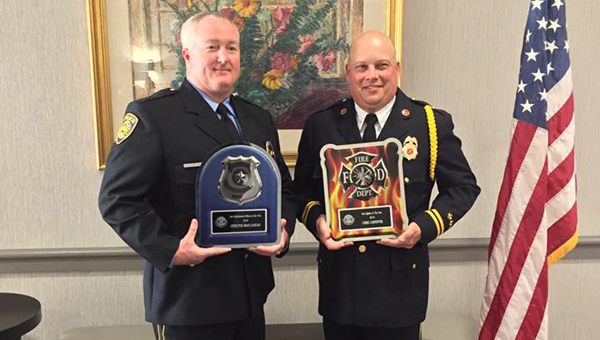 HUNTSVILLE— Two local first responders were recently named Alabama’s Police Officer of the Year and Firefighter of the Year at a state American Legion conference in Huntsville June 17.

Pelham Fire Capt. Christopher Carpenter and Police Det. Brad Jordan were both awarded for their hard work and dedication to their departments and will move on to be considered for the national titles in the coming months.

“We are very excited. It makes us very proud,” said Police Lt. Pat Cheatwood in a June 20 interview. “We have a whole department of hard working employees, and they do good work from day-to-day. It’s nice for them to be recognized.”

The American Legion Matthew Blount Post 555 first awarded the two responders at a May 5 meeting.

First Vice Commander Tom McDaniel said it’s become a tradition for Post 555 to reach out to its local police and fire chiefs for these awards. The selections were based on the officers’ accomplishments and character, according to McDaniel.

“It’s important to us because we want to reach out to the community and let the community know, through the American Legion, that there are police officers and fire fighters out working for them,” McDaniel said of the awards. “It’s just like what we do, when we reach out and let them know there are veterans and people out fighting for them everyday.”

Jordan and Carpenter plan to attend the national American Legion conference in Cincinnati, Ohio, for a chance to be named the national police officer and firefighter of the year.

“It was a great honor,” Cheatwood said. “We are very proud. It was a good day for Pelham.”