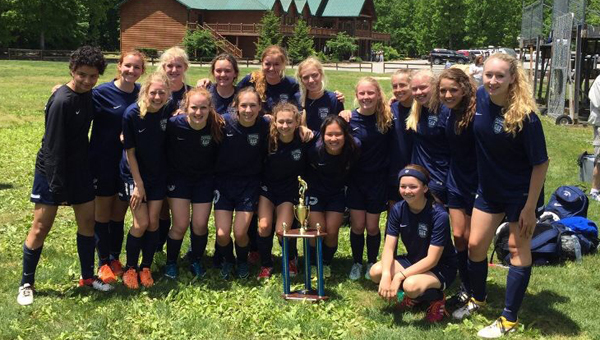 The Evangel Lady Lightning placed second in Division II of the NACA soccer tournament, which took place from May 9-12. (Contributed)

DAYTON, Ohio – Evangel Christian School has only had a girls soccer program for two years now. The young program, which started in 2015 with Matt Popinski as the head coach, had mixed success in its first year of existence, as the team’s youth and lack of numbers made for hard times. However, Evangel had quite the turnaround in its sophomore season, as the Lady Lightning tore through the regular season without losing a game to a high school team, and finished second in the NACA national tournament.

Evangel, a state-registered church school, competes athletically in the Alabama Christian Sports Conference. ACSC schools are eligible to compete in the National Association of Christian Athletes, which hosts more than 3,000 participants annually in nine sports. Popinski and his Evangel team made the decision this year to compete in the NACA soccer tournament. Teams must qualify for the NACA through the regular season, but the tournament is open for any team that is eligible to compete.

“That was absolutely our goal,” Popinski said. “From the beginning of the year, we wanted to go to NACA.”

Evangel is one of the few teams in the ACSC that has a girls soccer program, and the Lady Lightning spent their regular season playing AISA teams as well as club teams from the Birmingham area. Over the course of the regular season, Evangel went 8-0-3 in games against high school teams, and rode that undefeated record into the NACA. However, one of Evangel’s leading scorers, Olivia Sanders, tore her ACL in the final minute of the final regular season game, and was out for the NACA. Abby and Izzy Smoke, along with Sarah Watlington, three more impact players for Evangel, were also unavailable for the tournament as well.

“Going into the tournament we were nervous,” Popinski said. “Those are our fastest four players. We had to change our style some. We ended up playing a 4-5-1 in the tournament.”

The NACA splits each tournament into two different divisions, and uses group play to determine which teams will be in which division. After Evangel lost 2-0 in the first game of group play to eventual Division I finalist Providence, the Lady Lightning came back in the second game of the tournament to be Mt. View 3-0. Evangel then qualified for the Division II championship on a tight, one-goal loss to Grace Academy (NC) based on goal differential. Evangel eventually lost to Shenandoah in the Division II finals, but Popinski spoke incredibly highly of his bunch and the way they played in the national tournament.

“We outworked everybody we played,” he said. “Some teams were better than us, but we outworked them, we had more heart than any team I’ve ever been around.”

Emma Popinski, an eighth grader, had to move from her outside midfielder role to center mid with the losses of Sanders, Watlington and the Smokes. Emma Popinski along with classmate Laura Vaughn were named to the All-Tournament team, as was senior Bailey Adair. Matt Popinski also mentioned the impact that Bishop Reese, Lucy Sullivan, EL Ray and LeeAnna Nelson had on this team, and reemphasized that this team had more heart and determination than any he has been around.

“I’ve been coaching for 20-plus years at the club, high school and ODP levels,” Popinski said. “I have never been around a group of girls that cared for each other and worked so hard for each other as this group.”

Evangel finished the year with a 9-3-3 record.