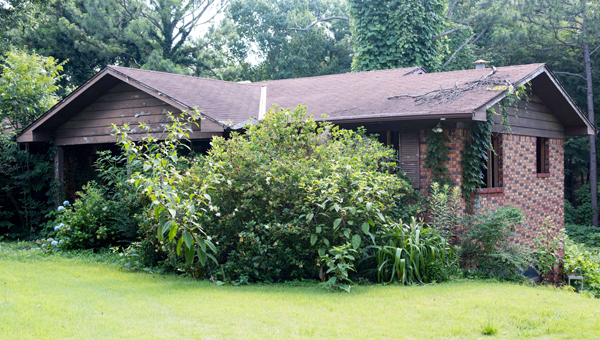 PELHAM—A vacant and uninhabitable home was declared condemned by the Pelham City Council at a June 20 meeting. Despite attempts to revitalize the property, located at 1830 Trail Ridge Drive, the city determined the condition of the house was unsalvageable.

According to Pelham’s Building Official Bob Miller, the cost related to repairing issues with the foundation, mold, graffiti, broken windows and more greatly outweigh the eventual worth of the residence.

“It’s getting worse,” Miller said at the meeting. “The kudzu is about to take over the house. It’s all the way up on the driveway. It needs to come down, in my opinion.”

Kelley Gray, the heir and son of the former resident, spoke out against the resolution at a June 6 public hearing. Gray’s mother and grandmother have passed away, and he said he was away in the military when the home was first vacated in October 2009 or 2010.

Gray explained he has spoken to Miller about getting the property fixed, and said he has documentation showing he’s been maintaining upkeep to the point where “it’s at least not a danger to the public.”

“I put in as much effort as I could while also trying to maintain my living,” he said.

He added that he could supply the Council with a letter of intent to sell the property to a contractor who intends on flipping it; however, the house is tied up in an estate and it may be years before the contactor could close on the deal.

Pelham resident Debbie Grebel lives down the street from the property, and said she has watched the property deteriorate over the years. Although the grass in the front yard is maintained by one of the neighbors, she said the growth of ivy and other plants is extensive.

“It’s dangerous to me to think of the children, or anybody, going around maybe wandering in and getting hurt,” Grebel said at the June 6 public hearing. “I think something needs to be done fairly quickly about it, and it does bring down the value of our neighborhood a great deal.”

Official condemnation of the property does not call for the city to immediately demolish the structure, according to City Council President Rick Hayes. He said the property owner has a month before the city takes action.

The city would then go through and clean up the yard and the whole parcel to improve its appearance. The first priority, Hayes said, would be to address the structure.

“This is a situation none of us are happy about, and that’s the reason we’ve extended this for much longer than would have normally been allowed in a situation like this—going over two years from the time the first permit was pulled,” Hayes said. “It has been years, and we have gotten plenty of feedback on this. We’ve gone out and looked at the property…for the neighborhood, I think it’s also, unfortunately, a clear solution at this time.”